Time to plant perennials – but choose flowers that get along 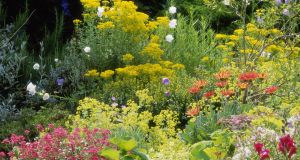 They say you never forget your first love. For me, it was perennials. After a childhood of sullen rockeries, squat conifers and dreary heather beds, an herbaceous border in full bloom seemed as exotically beautiful as a peacock in full plumage.

The teenage me dreamed of delphiniums. Blue Himalayan poppies. Swathes of pepper-scented, ruby-coloured lupins. To this day, I go slightly weak at the knees at the sight of peonies in flower, hypnotised by all that rumpled, extravagant beauty.

Perennials have, of course, moved on a lot since then, not least in the ways in which we grow them. No longer does the traditional herbaceous border reign supreme, its popularity eclipsed by a more naturalistic style of gardening as well as a more naturalistic palette of plants.

Instead of tight groups of perennials carefully calibrated according to a Gertrude Jekyll-esque hierarchy of height and colour – tallest to the back, shortest to the front, hot colours to one end, cool to the other – more and more gardeners are striving to create “sustainable plant communities”. In other words, happy families of compatible plants that share a fondness for the same growing conditions and that are content to co-exist rather than to out-compete one another in their search for light, space and nutrients.

Think of it as an artificially constructed ecosystem, the idea being that this ecologically-minded approach saves greatly on time and labour by reducing the need for intervention on the part of the gardener. Although it should be added that, rather like human families, this is harder to achieve than it looks.

Whatever your own preference when it comes to using perennials in your garden, the same essential rule holds true, which is to select the plants that best suit their growing conditions, including the range of different micro-habitats that most gardens offers.

Hot and sunny with a free-draining soil of average fertility? Then some of the lovely perennial plants you can grow include species/varieties of verbena, salvia, achillea, agastache, artemisia, boltonia, agapanthus, sedum,  centranthus, eryngium, helenium, many kinds of perennial geraniums, and ornamental grasses such as calamagrostis, stipa, miscanthus and pennisetum.

When it comes to editing your final selection, it’s also useful to classify perennials according to certain other characteristics.

Top of my list are those that are long-flowering, long-lived and relatively low-maintenance.

Likewise, much as I adore their fleeting beauty, I try to avoid using too many ephemeral perennials  (peonies, lupins, oriental poppies) as the short-lived nature of their flowers/ foliage results in a visual “hole” in the planting.

But I do make sure to include plenty of long-lasting “filler” plants – the quiet workhorses of any perennial display – to glue it all together. Many of these are excellent foliage plants that also provide a pleasing foil for showier perennials. Examples include species/varieties of euphorbia, rodgersia, artemisia, lamium and stachys as well as different species of ferns and many kinds of ornamental grasses.

As long as the weather isn’t too cold or wet, mid-March to April is an excellent time to plant almost all perennials as well as to lift and divide many species. As always, good site preparation is everything. So make sure the soil is weed-free and raked clear of stones and other debris. If it’s of very poor quality, then it’s worth spreading a light layer of horticultural grit plus some well-rotted manure or garden compost (don’t bother digging this in as it will naturally be incorporated into the soil during planting).

Before planting, thoroughly soak the root ball of each plant by dipping it in a bucket of tepid water. Make sure to plant to the correct depth (too deep is every bit as bad as too shallow) as well as to the advised spacing. Make sure, also, to keep the bed weed-free and to protect young plants from slug damage until their root systems properly establish themselves.

Another, much more cost-effective but initially more labour-intensive option is to sow seed of a mix of compatible perennial species, such as those designed by Pictorial Meadows (pictorialmeadows.co.uk), to suit a range of growing conditions. These are best sown in autumn but can also be sown from late March-May once soil conditions are favourable.

A wide range of perennials are available from most good Irish garden centres as well as from Irish specialist nurseries (irishspecialistnurseries.com), many of whom have stands at the Plant Fair in St Anne’s Park, Raheny, Dublin 5 (Saturday, March 10th)

Whichever option you decide, I promise that you’ll fall deeply in love with the results.

The recent harsh wintry weather has been challenging for many species of garden plants, not only because of the much colder than average temperatures, snow and icy winds but also in terms of the flooding resulting from the thaw. Most soils are now cold and badly water-logged, so it’s advisable to avoid working or walking on them until conditions improve a little to avoid the risk of further damage to soil structure.

As for the scale of damage to plants caused by the recent cold spell, this will take time to assess.

Some species have a Lazarus-like ability to recover while others will shed their flowers/ flower buds and even their leaves in an attempt to husband their limited resources. So resist the urge to discard or dig up damaged plants or to cut back supposedly damaged growth, and allow them time to slowly recover.

For useful tips on raising plants from seed sown under cover, see my gardening column of February 17th “Secrets of growing from seed: 10 tips to get your garden going”, irishtimes.com)

A hurley as a sex toy? Ah would you camán out of that?
6