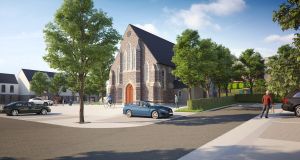 A computer-generated image of the scheme proposed for the former Carmelite convent site in Delgany, Co Wicklow

The ongoing and exponential growth of Greystones and its environs looks set to continue apace for several more years at least judging by the latest application for new housing there.

While the delivery of more than 2,000 new homes is already underway in the north Wicklow town thanks to the combined efforts of publicly-listed developers Cairn Homes and Glenveagh Properties, local builder the Woods Group, and Patrick Durkan’s D|Res Properties, more than 200 units look likely to come on stream in the neighbouring village of Delgany.

The proposed new homes are being planned for the former Carmelite monastery lands, which were sold in a €15 million off-market deal late last year.

Having weighed up the strength of demand from first-time buyers, trader-uppers and downsizers alike, the developer, Drumakilla Ltd, has submitted a fast-track planning application to An Bord Pleanála for a strategic housing development of 232 units on the 6.2 hectare (15.32 acre) site.

Located between Convent Road and Bellevue Hill, the proposed scheme would include 96 houses and 136 apartments distributed between two four-storey apartment blocks and five three-storey duplex blocks.

Given its status as a protected structure, the former Carmelite monastery would be left largely intact, save for the proposed demolition of a modern extension to the rear of the main building. According to the planning application, the developer is proposing to convert the monastery property into a community/cultural facility and crèche.

The development also provides for the landscaping of private, communal and public open space, the removal of walls, and the provision of 420 car parking spaces and 364 cycle parking spaces.

Under the terms of the Government’s “fast track” or Strategic Housing Development (SHD) scheme, developers seeking permission for 100 residential units or more are not required to apply to their respective local authorities, but can instead apply directly to An Bord Pleanála.

With ordinary planning applications for large housing developments to local authorities typically appealed to An Bord Pleanála, ultimate approval can, in certain circumstances, take up to 18 months to secure. The fast-track regulation sees determinations reduced to a maximum of six months, meaning Drumakilla’s principals can expect to secure a decision on their plan by next April at the latest.

News of the developer’s ambitions for the former Carmelite site comes just three months after The Irish Times reported on Ronan O’Caoimh’s proposal to develop 99 houses on lands at nearby Chapel Road.

While both O’Caoimh’s and Drumakilla’s plans will take time to come to fruition, prospective housebuyers already have plenty of new developments to choose from in Delgany and Greystones.

Both Cairn and Glenveagh Properties are progressing with the latest phases of their respective new-homes schemes at Glenheron and Marina Village, in Greystones, while the local Woods Group brought the first phase of 74 three- and four-bed houses at its new Churchlands scheme in Delgany to the market last spring.

D-Res Properties, meanwhile, is in the advanced stages of delivering 70 three-, four- and five-bed homes at the neighbouring Eastmount development.