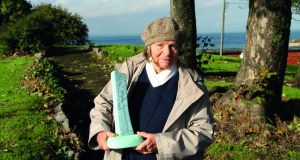 A charity art auction to raise funds for a monumental sculpture by Imogen Stuart in Sandycove is under way.

When the German-Irish sculptor was awarded the McAuley Medal in 2010, the then president Mary McAleese paid tribute to her “genius” crafting and “canon of work that synthesises our complex past, present images and possible futures”.

The daughter of renowned art critic Bruno E Werner met future husband Ian Stuart – grandson of Maud Gonne – when they were both studying under sculptor Otto Hitzberger in Germany. The pair married in 1951 and moved to Ireland.

A member of Aosdána and one of six distinguished members holding the title of Saoi, or “wise one”, Imogen Stuart is one of Ireland’s most respected artists, with her work appearing in churches, universities, parks and civic settings throughout the Republic.

Two of her most recognised pieces are the monumental sculpture of Pope John Paul II in St Patrick’s College in Maynooth and her carved altar in the Honan Chapel in Cork.

At the age of 93, the prolific artist is still working from her studio in Sandycove. One of her recent projects is the design for a tall standing stone for the grassy hill in Otranto Park, beside Sandycove Harbour, in Dublin, which the artist has gifted to the local community.

Dún Laoghaire-Rathdown County Council has agreed to contribute to the erection and maintenance of the sculpture, which will stand like a Celtic monolith looking out to sea in the coastal Dublin village.

Whyte’s auction house is holding a charity sale – with no commission, so what bidders pay is the end price – to raise funds to carve the 12ft stone sculpture. The online sale is now open and ends on Tuesday, October 27th.

The catalogue of 47 lots features quite a few works by Stuart herself, along with maritime paintings, many of which are in the €300-€500 bracket.

Lot 23, a hand-carved Dublin granite sculpture by Ciaran Byrne, I Am Not Afraid – the words of which are from an ancient Irish text and will be carved into the standing stone – is listed at €250-€350.

But the piece that will more than likely resonate with all of us this week is an etching by Dingle-based artist Maria Simonds-Gooding.

The Day the Boat was Looking for the Dolphin, though created many years ago, sadly captures the work of many boats and search and rescue teams in Dingle this week, after Fungie, the Kingdom’s favourite pet and the world’s oldest solitary dolphin, went missing from his playground in Dingle Bay. The etching is priced at €300-€500.

The organisers of the event hope the auction will raise enough funds to allow the carving of the monument, which has already been quarried, to begin by the end of October.