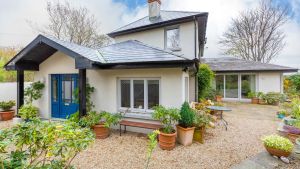 A three-bed house at the bottom of Corbawn Lane in Shankill sits in a pretty special location: it has sea views, a large garden and sheltering it, mature trees like those that once lined all of Corbawn Lane. It’s also very private, with walls all around. There is public access to the sea at Shankill Beach just outside, at the end of Corbawn, part of the beach that runs from Killiney to Bray.

Clifton Lodge, a detached 166sq m (1,790sq ft) property on one-third of an acre (0.14 of a hectare), is a very modern, recently-built house. Originally it had been the coachhouse of a neighbouring property, Clifton House, now called Dunsandle.

When the current owners bought Clifton in the early 2000s, they decided on a revamp that involved clearing out everything except its four granite walls and rebuilding the house – they moved in in 2009. Now, a virtual tour shows a bright home painted mostly white with timber floors, fitted out with a mix of period and modern furniture, colourful rugs and artwork. The property is now for sale through Sherry FitzGerald for €1.295 million.

A good sized front hall has a study that could work also as a bedroom and a shower room off it. It opens into a large bright open-plan living/dining/kitchen area, with floor-to-ceiling timber framed sliding doors opening onto a sheltered patio.

There’s a cast-iron wood-burning stove in a raised fireplace inset into the chimneybreast with recessed bookshelves beside at the living room end of the large open-plan space. The kitchen at the other end has a large window with sea views, quartz-topped counters and island unit and a large black two-oven Aga.

A large single-storey sitting room with a vaulted ceiling opens off the kitchen: it also has sliding doors opening on to the patio as well as a large bay window with a window seat. This room has sweeping views of gardens and sea.

Stairs lead up from the large open plan area to two double bedrooms. The main bedroom is dual aspect, with views of sea and the large gardens of neighbouring Dunsandle House. It has a smart en suite with a bath and tiled corner shower.

The gardens are laid out in lawn with flower-filled borders, a herb garden, fruit trees – apple, plum and pear – and raised vegetable beds. There is off-street parking behind tall wooden gates.

The area in front of the houses, overlooking the sea, is zoned F, which means nothing can be built there. Clifton Lodge is a short walk from Shankill Dart station, close to shops at the top of Corbawn Lane and not far from Shankill village. And keen swimmers could be in the sea within a minute of leaving the Lodge.