A site to behold on Howth hill for €1.8million 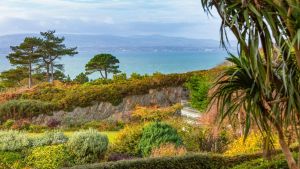 Dating from sometime between 1940 and 1950, Doldrum Hill in Howth has been home to the same family for the past 48 years.

The split-level detached house would at that time have been a cutting-edge design, built to take in the superb views over Dublin Bay from its elevated position, is perched on 0.7 of an acre on Old Carrickbrack Road in Howth.

The owners who have raised their four – now adult – children here are downsizing to an apartment. What they will miss most is the serenity of their home’s location on the large private site overlooking Dublin Bay.

“After a day’s work – especially on a Friday – sitting here looking out at the bay was like a reward. You could just sit here all evening and dream,” says the owner. And it is the views that will certainly attract buyers.

Due to the property’s elevation and south-facing aspect, the panorama gives sweeping views of the bay across to the Sugarloaf mountain and Dublin city itself.

The aspect also allows for remarkable sunsets – something you really don’t get from properties located on the south side of the city.

The three-bedroom house, while in good order is due an upgrade. The energy rating of E2 will be something new owners will want to address, as will having an outside utility (which lies adjacent to a detached double garage).

Standing at 150sq m (1,611sq ft) the house could be extended – subject to planning – but given the size of the garden, its total privacy and the fact that neighbours have extended, it should be a straightforward enough task.

The gardens, though now too big for the current owners to manage, are a further selling point. Winding steps lead to the south-facing lawns which are well stocked with colourful shrubbery, mature trees and hedgerows.

“Our kids and neighbouring families had so much fun here over the years. Every Easter we would organise egg hunts and all the kids would spend the day searching for treats hidden in the gardens.”

Further winding steps at the base of the garden provide pedestrian access to Old Carrickbrack Road, where families can take some of the noted coastal walks from Howth to Sutton Cross.

Situated on one of Howth peninsula’s most sought-after addresses, the property is within easy reach of Howth village with its array of restaurants, shops, DART station and picturesque harbour.

Sporting facilities locally include the yacht club, three golf clubs and numerous walking trails. The area is close to Dollymount Strand and angling facilities in the village.

The property is on the market through Sherry FitzGerald seeking €1.8 million.