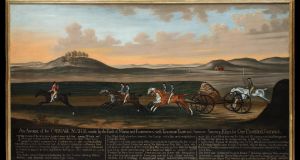 Daniel Quigley painting of The Great Carriage Match on Newmarket Heath by the Earls of March & Eglington 1750, (8ft x 3ft).

With 160 established collectors from around the globe, every exhibit is vetted by a team of 150 specialists drawn from all over the art world. And the emphasis is on cross-collecting, with pieces spanning several thousand years within all genres.

In 2017, the show attracted more than 44,000 visitors. But also that year the police were in search of the Pink Panther Network, named by Interpol after the crime-comedy films starring Peter Sellers. The thieves made off with three rings from a stand at Masterpiece, which had a combined value of £2 million (€2.26 million).

The gang’s first acknowledged theft dates back to 1993, with a £500,000 (€564,831) diamond heist from a London jeweller hidden in a jar of face cream, mimicking an act seen in the film The Return of the Pink Panther.

Interpol believes that network, based in the Balkan states, is behind some of the of the most audacious jewellery heists over the past two decades with combined thefts of over €334 million.

For the majority attending the exhibition, it is a far more upmarket affair with lots of champagne quaffing and swiping of platinum credit cards, at what is reputed to be the most important art and antiques fair in the world.

Exhibiting at the fair does not come cheap though. Dublin-based antique dealer Rory Rogers, who specialises in 18th century Irish furniture, says “the basic cost of my stand is £40,000, before shipping and insurance”. That is also before accommodation, travel and all the extras are thrown in. Some Irish dealers have estimated that the overall cost of attending the fair is in the region of €100,000.

But Belfast-born Rogers, who has been in the business for 30 years, with a brief stint on Francis Street in Dublin, is attending the show this year as a solo exhibitor as he believes there is a significant interest in 18th century Irish furniture.

“It’s my passion and I travel the world sourcing it and have some very important pieces for this fair,” says Rogers of his collection.

Included in his exhibition is a side table which has been on loan to Malahide Castle from a private collector. “This is the Rolls-Royce of side tables, with its profusely-carved frieze and lion’s mask,” he says.

Along with important mirrors, Rogers has a demi-lune commode which originally came from Donacomper House in Celbridge and was last sold by Christie’s in London in 1977.

Most interesting are four George II decorated shell-and-feather cabinets from circa 1730. Decorating these cabinets was what the young ladies of leisure did in their spare hours at stately homes in the 18th century. This set was executed by Sarah Newenham (Penrose) of Woodhill in Co Cork and mentioned in the Cooper Penrose will of 1813. Remarkably, these pieces remained within the family until 1933 and part of the collection was rediscovered by the Knight of Glin in the 1980s. Documented cabinets such as these are extremely rare and are considered museum pieces.