Investor Eye: I’m gambling people would like to live in a private flat in a communal, historic space 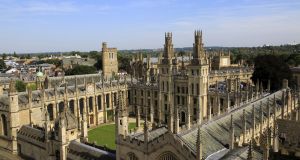 Collegiate living at All Souls College, University of Oxford

The other day I was thinking about how I would like to develop a site containing three large historic buildings, a car park and gardens, and the word “collegiate” floated to mind.

We tend to think that buildings or sites will have a specific role – they will be homes or offices or shops. You also have places that are “mixed use”, a combination of these. But a slightly trickier thing to pull off is to create somewhere that is its own unique world, that is a kind of self-contained community with a distinct identity.

I can remember years ago when I was applying to university, that there were a rarefied number of places that offered a “collegiate experience”. There is famously Trinity College in Dublin, Harvard and Yale in the US, and Oxford and Cambridge in England, but how exactly being at a college differed from being at a straightforward “uni” was something that was not entirely clear to my 18-year-old self.

Most universities are relatively open and interlinked with the town or city in which they are contained. The students might be living in regular houses or vast student halls and commuting across the city every day. But the “college” is something more intimate and closed off from the world, where people eat, sleep, socialise and study all in one place and have a sense of belonging to a tighter-knit group.

Because it is partially closed off from the outer world, the college generally feels a greater need to be diverse within its own precincts: generally opening up from a gated entrance into various courtyards, living quarters, recreational spaces, eateries, libraries and gardens. Like the inhabitants of medieval monasteries, you could almost never leave the grounds of the college or interact with the surrounding town at all.

I’ve always been fascinated by the idea of self-contained communities and the special sense of identity and belonging they engender. I’m not about to start setting up my own college, or offering educational or catering facilities, but the idea that you can do something with a residential community to make it feel distinctively “collegiate” intrigues me.

The site I’m currently redesigning has three historic buildings: a main house; a large “annex” building; and an “old library” (formerly stables). I have a vision that, after construction of a new residential building, landscaping and the installation of electronic gates, we will have a site that will lead the visitor from the “library court” to the “new court” and on to the slightly hidden-from-view gardens, modelled on the type of private gardens seen in Oxbridge colleges.

There’ll be recreational spaces for the sole use of residents and the odd public space art and plaque nodding to the historical significance of the site and some of its intriguing former residents.

Will all this encourage a particular “esprit de corps” amongst the people who live there? Will they even sense that hints of a “collegiate” community, rather than anonymous blocks of flats, have been carefully planned? Will they wish to participate in such a semi-collegiate sense of living?

You often hear of students moving out of halls after their first year at university into shared houses, only too glad to leave behind the community and lack of privacy of the halls in exchange for a more selective group of housemates in a tightened circle.

Twenty-somethings too often plump for the shared house option, though sharing just a kitchen and lounge, sometimes without even a garden or balcony space. With no intermingling in the surrounding area it might not necessarily be the most expansive and stimulating of experiences.

Usually from that point onwards, people tend to break off into ever smaller units of solo dwelling or couples living together, having ever less social interaction with new faces. But I’m gambling that people would like to combine the privacy of their own flat with the community feel of living in a distinctly characterful, historic community.

It will be interesting to find out. Property development is about far more than simply producing living spaces that conform to current technology and tastes in decor. At the heart of every development is some sense of how the building interacts with the community and city around it. The “collegiate” style is just one variety of attempting to bring the warmth and sense of tradition back into modern living.

Damian Flanagan is a property developer, writer and critic. @DamianFlanagan