Glenageary sleeping beauty in a private spot for €2.9m 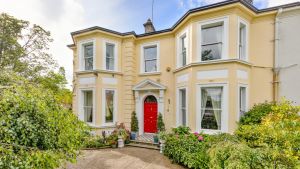 A large semi-detached Victorian, tucked away at the top of one of Glenageary’s prettiest roads, has five bedrooms, lots of original features – and potential for expansion. It sits on a third of an acre and has plenty of room to be extended like its neighbour, which had a major makeover in the early 2000s.

Larnaca, 7 Marlborough Road, Glenageary, Co Dublin, a 303sq m (3,260sq ft) house is now for sale through Lisney for €2.9 million. This house and its semi-detached neighbour, Limasol, was apparently built in the mid-1850s for a British soldier returning home from a posting in Cyprus; it’s thought that two brothers bought the plot and built the two matching houses.

Larnaca is an executor sale: owned by one family for about 40 years. It was well maintained and is in good condition – but it’s likely that new owners may want to expand. Next door, Limasol has been considerably extended with a single-storey addition that spans the width of the back of the house, creating room for a large open-plan kitchen/breakfastroom/family room. This expansion came at a considerable price as a result of the recession: bought at auction in 2004 for €2.525 million, the house was lavishly renovated and sold 10 years later in a receiver sale in 2014 for €2.435 million.

Larnaca, number 7, is tucked away in the top left corner of this quiet, wide L-shaped road, which leads from the Glenageary Dart station on Station Road to Adelaide Road in Glenageary. A bright red front door with a fanlight over it opens into an inner porch with stained glass windows. The drawingroom on the right has elaborate cornicing and a centre rose, a triple-bay window and a large white marble fireplace. The diningroom on the left is dual aspect, with a triple bay window at the front and a tall window at the side.

Upstairs, there’s a bedroom/office on the return and on the top floor, the family bathroom and four bedrooms, all doubles, off a wide bright top landing. The two largest bedrooms are over the drawingroom and diningroom below and have bay windows looking down Marlborough Road. The main bedroom has an en suite.

The back garden is very private, with plenty of mature plants and bushes, a patio and a number of pretty whitewashed outbuildings around a little courtyard – buildings that presumably would be demolished if new owners extend. There is lots of room to park at the front and side of the house.