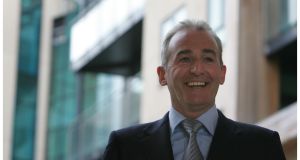 At the height of the boom and at the height of his powers, Turnberry on Kerrymount Avenue, Foxrock, was the house that developer Paddy Shovlin called his home.

Roll forward to today, and the mansion occupied by the erstwhile Landmark Enterprises chief up until his move to the UK in 2012 to declare bankruptcy, would appear to have a new owner.

An examination of the Property Price Register shows Shovlin’s former Dublin residence was sold on June 26th for €3.1 million.

The sale of the property represents just the latest severing of ties of Ireland’s Celtic Tiger developers with the capital’s toniest thoroughfares. Unsurprisingly, Shrewsbury Road in Dublin 4 leads the way in that regard, having witnessed the departure in the depths of the recession of Sean Dunne, Paddy Kelly and Derek Quinlan.

Shovlin’s one-time home has beaten US-based developer John Flynn’s former Dublin residence Cooldrinagh to the punch in the search for a buyer. This despite the fact that the latter property has been on and off the market for the past six years. Cooldrinagh, on the corner of Kerrymount Avenue and Brighton Road, was offered for sale originally in 2013 for €4.25 million. While that price has since been reduced to €2.75 million, a buyer has to emerge for the property, which famously bears the distinction of having been Samuel Beckett’s childhood home.

Flynn is selling Cooldrinagh as he and his family now spend most of their time in the US. When the three-bed Edwardian on an acre was purchased at auction in 1996 for £850,000, it set a record for Foxrock property at the time.

Shovlin, for his part, continues to live in the UK. After emerging from bankruptcy in May 2013, the former Landmark Enterprises chief teamed up with developer Mark Booth on the establishment of Hayfield Homes.

The company, which Shovlin describes as a “medium-sized house builder in the UK market”, is delivering 400 homes per region per year. Hayfield is in the process of buying a landbank comprising more than 2,000 plots in areas such as Stratford-upon-Avon and Leamington Spa in the English midlands.

Prior to the crash, Shovlin’s Landmark Enterprises had been counted as one of the most significant players in Ireland’s property industry. Among the company’s most notable projects were the €500 million Beacon Court and Beacon South Quarter mixed-use schemes in Sandyford and the Harcourt Building in Dublin city.

Has lockdown reduced the number of premature babies? This doctor thinks so
7