A Fechin great buy: church in Termonfeckin for €130K

St Fechin’s Church, in the hometown of the creator of Father Ted, is for sale 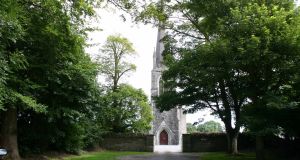 No sniggering down the back, now. St Fechin’s Church in Termonfeckin, Co Louth, a fine looking church, is for sale for €130,000.

The ex-Church of Ireland church, built about 1792 but closed for the past seven years, is now on the market with Sullivan Property Consultants in Drogheda.

“The former Church of Ireland church in the small village in Co Louth (population 653 in the 2006 census, growing to 1,443 in 2011) has all its original features. It is 158sq m or 1,701 sq ft, with an entrance hallway, worship room with tiled floor, marble baptismal font, altar, wooden pulpit and pews.

The site is about half an acre, with a right of access to the graveyard next door – which includes the 9th or 10th-century Termonfeckin High Cross, with a winged figure above the Crucifixion on the east face, Christ in Glory on the west, and interlacing and geometrical patterns elsewhere.

While the driveway is part of the sale, the shared graveyard around it is not. Fintan Sullivan of the agents says it is in good condition generally, that the roof is in good order but some of the timber inside may need replacing. There has been interest in St Fechin’s Church, for residential, church or community use, and there is an offer on it.

Sullivan says it could be suitable for a variety of businesses or as a home (it would need planning permission for change of use, and services would need to be brought up from the road).

With declining church attendances, there have been many inventive conversions around Ireland of deconsecrated churches: to offices, homes and restaurants.

A number of former Church of Ireland churches in the area have sold in recent years. Sullivans sold a similar former building in Ballymakenny village nearby about five years ago. It is a church for another denomination now, while Tullyallen church, sold about 20 years ago, is a residence. A church on Mary Street in Drogheda is now a funeral and wedding venue, Sullivan says.

Termonfeckin is an attractive, busy village 8km north-east of Drogheda. Apparently a medieval monastery was founded in the village by Saint Féchín of Fore in the 7th century. After a series of plunderings (Vikings in 1013, the clan Ui-Crichan of Farney in 1025, raiders from Bregia, or Meath, in 1149) the village became ecclesiastically important in the late 12th century, when an Augustinian monastery was founded there. A convent of Augustinian nuns flourished in Termonfeckin until 1540, after Henry VIII’s Reformation.

Also in Termonfeckin is An Grianan, the Irish Countrywomen’s Association’s headquarters, in an 18th century stately home.

Another claim to fame of Termonfeckin is Arthur Mathews, co-writer (with Graham Linehan) of Father Ted, and so, deliciously, a great reviver and populariser of the eminently flexible and evocative, ahem, ancient Irish word feck.

Mathews grew up in Termonfeckin from the age of eight. It was “lovely in the sunshine”, he remarked in an Irish Times interview, but was a town “with such an unappealing name that you could probably get 10 per cent off the house prices there”.

Even the local GAA team – St Fechin’s – are informally known as “the Feckers”.

Who was St Féchín of Fore? Saint Féchín or Féichín (died 665), also known as Mo-Ecca, was a seventh-century Irish saint, remembered as the founder of the monastery at Fore (Fobar), Co Westmeath. Among all the holy-ness and veneration, he also seems to have been a bit of a political mover in his day, and had a roles as a mediator and negotiator between the Luigne (or Luigni) of Connacht, of which he was supposedly a member, and the more powerful Luigne of Meath, on whose territory Fore Abbey was founded.

And that political streak seems to have a pretty unchristian twist. There’s a story about Féchín and the plague in the Latin Life of St Gerald of Mayo and in the notes to the hymn Sén Dé (by Colmán of the moccu Clúasaig) in the Liber Hymnorum. It says the joint high-kings Diarmait Ruanaid and Blathmac appealed to Féchín and other churchmen, asking them to inflict a terrible plague on the lower classes of society and so decrease their number. Féchín was one of the churchmen to answer their request and to perish in the event (he died of the plague), whereas Gerald stayed aloof and survived.

On foot of which, a Tomás Ó Cárthaigh posted some verse in 2015 on writingsinrhyme.com, called Saint Fechin was no Feckin Saint. It begins: Saint Fechin was a feckin fecker / That bigger feckers made a saint / Prayed for a plague to plague the poor: / The fecker: a saint he aint!

But surely the other main attraction here is the name. Who wouldn’t want St Fechin’s Church as their address?

Science of kissing: why a kiss is not just a kiss
5

Our dream home came on the market. Then a nightmare followed
10

Ask the expert: My daughter is railing against my new relationship
Real news has value SUBSCRIBE