Skeletons in the closet? Will they devalue your house?

However sceptical you may be, research shows haunted properties can be difficult to sell 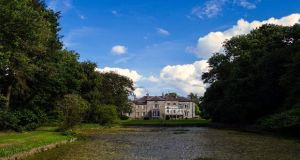 Shankill Castle is said to be haunted internally by the ghost of Peter Aylward since around 1708. The Cope family have made a virtue of it through its annual Scarefest event

It’s the time of year when subscribers to the supernatural believe that the veil dividing our world from that of the spirit domain is at its thinnest. But what happens when the supernatural moves in?

Whatever you may believe, Realtor.com, a major player in online real estate and whose parent company Move Inc was purchased by News Corp for €950 million in 2014, took the paranormal seriously enough to produce a recent paper entitled Haunted House Real Estate Survey.

The research found that 30 per cent of people surveyed would live in a haunted house and 28 per cent of respondents believed they already have – citing experiences such as inexplicable noises, moving objects and macabre feelings within rooms.

In a landmark 1991 Stambovsky v Ackley case in New York, Stambovsky – the buyer – sued the seller and agent, for not disclosing that a property was haunted (and had been reported as such in national media), citing that it reduced the value of the property. In an appeal, Stambovsky won the case which is often referred to as the Ghostbusters Ruling.

California has even enshrined it in legislation that property sellers must disclose if a property is ‘stigmatised’, ie, if it has been the site of a death or murder within the past three years. Unsurprisingly research has found that a property with a chequered past can be difficult to sell and carry up to a 20 per cent price drop.

There is no such ruling in Ireland, although IPAV president Brian Dempsey of DNG says, “If you are asked the question and know the answer you must give it,” adding that “with such a large purchase as a house it’s a good idea to get local knowledge too, so ask neighbours or the local shop and pub – but do use a bias filter.”

Dempsey recalls an event at a Georgian house in Wicklow which left him with a chill he would never forget: “I was with two prospective buyers who had come to view the vacant property. While viewing, we came back around to find two doors which had previously been closed were suddenly wedged open with door stoppers. The three of us stood there aghast – there were no doubts in any of our minds that those doors had been closed, and it will stay with me for the rest of my life”.

David Byrne of Lisney recalls how 20 years ago while closing up a property after an open viewing, a woman remarked on how there was an old gentleman upstairs.

“I said ‘I thought everyone was gone’ and I would get the gentleman, and tell him the viewings were over. But the woman clarified that she was a clairvoyant, and not only was there a man upstairs but also an old woman in the sitting room below, and both were spirits. I thought no more of it until a while later when a neighbour told me the sad tale of the couple who had lived in that housepreviously; they had not spoken in years, lived on different floors and both died in the property. It sent a chill through me as it completely echoed the clairvoyant’s story.”

The Cope family has called Shankill Castle in Co Kilkenny home since the 1990s, and Geoffrey Cope was fully aware of the legends of hauntings associated with the property when buying.

Shankill Castle is said to be haunted internally by the ghost of Peter Aylward since around 1708, and from the early part of the nineteenth century the front lawn has been occupied by a priest who was shot by the then owner.

Daughter Sybil Cope recalls growing up at Shankill: “It was fine because it was what I was used to, but friends refused to stay over. We used to get a lot of requests from paranormal investigators and we allowed four in over the years to record the antics of the ghosts. To be honest I was a bit sceptical until we had photographer Tim Walker here to shoot a cover for Vogue magazine. While searching for the ideal room, he remarked he wouldn’t use the blue room as he didn’t want to disturb the old lady in the rocking chair. I was taken aback as he described my grandmother who had died the previous year.”

Cope has recently made the castle’s ghosts work for their keep through their Scarefest event – where visitors can take spine-tingling tours through the castle. See shankillcastle.com.

While there are a number of commercial properties in Ireland capitalising on legends of hauntings, the current owners of 112 Ocean Avenue in Long Island, New York say they are haunted by the living.

Their home was the site of the Amityville horror, where Ronald DeFeo butchered his family, and the Lutz family, who subsequently purchased the house only lasted 28 days there – citing the horrors of paranormal activity. The macabre tale was recounted in the film of the same name, and the house has become something of a pilgrimage site for those with a penchant for the occult.

Not long ago it was customary in Ireland to host a Catholic mass when a family or couple moved into a property – to bless the house, but in recent years there has been a noted increase in demand for exorcisms.

In 2011, the Catholic Church warned that a surge in Satanism, facilitated by the internet, has led to a sharp rise in the demand for exorcism, and a six day conference on the subject took place at the Regina Apostolorum Pontifical University in Rome, Italy.

The Vatican has been running courses on the expulsion of evil spirits since 2004, and in 2013 the official exorcist for the diocese of Rome; Fr Gabriele Armoth claimed that Emeritus Pope Benedict XVI, “had done a lot for exorcists” including hosting a special audience for exorcists during his tenure. Benedict shocked the world when he resigned the same year – being the first pope to do so in 600 years.

There are three Catholic exorcists in Ireland who are called upon to banish malevolent spirits, most notably Fr Pat Collins.

Rev William Lendrum, a retired Church of Ireland exorcist, documented his 30-year career flushing out evils spirits from family homes in his book Confronting the Paranormal – A Christian Perspective. He describes exorcism “like a fire in your house that you have to put out”, and claims to have worked extensively with poltergeist activity.

In 2015, the BBC reported on an exorcism carried out on a house in Belfast by Rev Lendrum. Resident Tony Hamerton says he was plagued for 15 years by a dark cold presence in the house, said to be connected with a tragic death in the property. After Rev Lendrum set the spirit free, Hamerton remarked that it felt “like a morbid cloak was lifted off me”.

In China, Hungry Ghost Month, which is the seventh month of the Chinese lunar calendar, has similar cultural traditions to Halloween. Superstitions there have been found to have real life repercussions on property prices. A study conducted over a 10 year period by the National University of Singapore found that buying a house during the month – which superstition dictates will be haunted forever – has realised discounts of up to 10 per cent on house prices for savvy non-believers.

However sceptical you might be about skeletons in the closet, things that go bump in the night and ghosts, they can add up to a major headache when it comes to selling a property.