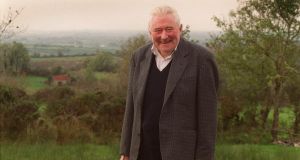 Andy McGovern had good reason to throw a party at the weekend. Having been diagnosed with motor neurone disease (MND) 41 years ago, he believes he is the longest survivor of the condition in the world, so his 86th birthday seemed like the perfect opportunity to celebrate.

When Andy was diagnosed, his six children were aged between two and 15, and at the time he was led to believe his life expectancy would be less than five years.

So Saturday night’s party in the Dugout bar in Aughavas, Co Leitrim was a good excuse to mark the many full years since, and to raise funds for the Irish Motor Neurone Association.

The Leitrim man said he was inspired by Fr Tony Coote, who walked 550km from Letterkenny, Co Donegal to Ballydehob, Co Cork following his diagnosis with MND last year, raising €500,000 for research and better services for sufferers in the process.

Another inspiration in his life has been Prof Stephen Hawking, who had been living with MND for 55 years when he passed away in 2018.

“I am the longest survivor in the world since he died. He was a great intellect and he was very badly disabled,”Mr McGovern said.

The two men connected on Facebook a few times over the years but the Aughavas native chuckled when he remembered a one-sided conversation when he got no response.

“I got in touch on Facebook and he wished me well. But I replied saying I wondered why with his huge intellect he did not focus on finding a cure. I said, ‘You are talking about black holes in space but we are in a black hole.’ He didn’t come back to me on that one.”

Having written two books, one a memoir entitled Against the Odds: Living with Motor Neurone Disease, Mr McGovern said the disease had actually opened doors for him.

He writes using a foot pedal to tap out words on his computer screen, while improved technology such as voice recognition has speeded up the process.

“I did two radio interviews this morning. I meet people I never would have met if this had not happened.”

Formerly a farmer who drove heavy agricultural machinery, he said the diagnosis was initially a huge blow. “I was angry and bitter and frustrated and I thought why me,” he recalled. He said a trip to Lourdes resulted in acceptance rather than a cure.

Thankful that the condition never spread beyond his two arms, he has adapted to his disability and has devised imaginative ways to do everyday tasks such as taking on and off his glasses (using the back of an armchair as a prop) or drinking a pint of Guinness through a straw. “I am not embarrassed by my disability any more,” he said.

Why your muscles feel sore a day or two after exercise, and what to do about it
Real news has value SUBSCRIBE