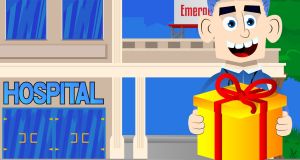 Surgeons may feel the need to complete procedures on time on their birthday because they might have plans for that evening, researchers suggest

With Covid-19 enveloping us in its cold embrace, and no end of severe lockdown in sight, I’ve decided that this week’s column must be a Covid-free one. In fact, such is the need to get away from current realities, I’m going to share some recent offbeat research with you.

The Christmas edition of the British Medical Journal (BMJ) is devoted to the idiosyncratic and the slightly frivolous, so it’s just what the doctor ordered for these dank days of January.

It is well established that common distractions in the operating room, such as noise, equipment problems and personal conversations, can have a detrimental effect on surgeons’ performance, but evidence using real-life data is limited.

So to test the theory that surgeons may be more rushed and distracted on their birthdays, researchers looked at deaths within 30 days after surgery for patients who underwent one of 17 common emergency surgical procedures at US hospitals in the period from 2011 to 2014. This was linked to information on surgeons’ birthdays. Overall, 980,876 procedures performed by 47,489 surgeons were analysed. Of these, 2,064 (0.2 per cent) were performed on birthdays.

The results stood up to further analyses, such as excluding surgeons with the highest patient mortality and adjusting for the timing of surgery.

So how did the researchers explain their findings?

Surgeons may feel rushed to complete procedures on time on their birthday because they might have important evening plans, they suggest. Birthday conversations with team members or birthday messages on their phones during surgery could also be distracting, leading to medical errors. Or could it be that surgeons are less likely to return to the hospital to see their patients who show signs of deterioration if they are having dinner with family and friends?

In fact, as this is an observational study, we cannot establish cause. But ultra cautious patients may wish to establish their surgeon’s birthdate, just in case. Or more logically, tell themselves that as the paper was published in the BMJ’s end of year edition, they can safely ignore birthdays as a putative cause of poor surgical performance.

Another paper of relevance to surgery in the same BMJ issue was one that asked if soothing words and music during an operation might reduce postoperative pain. This is a nod to the phenomenon of “connected consciousness” – the ability to perceive the external environment while under general anaesthesia.

German researchers set out to test the hypothesis. They looked at some 385 patients undergoing planned surgery – lasting one-three hours – under general anaesthesia at five hospitals. Patients were randomly split into two groups: one of whom were played a tape of background music and positive suggestions based on hypnotherapeutic principles, which was played through earphones during general anaesthesia. Those in the control group were assigned a blank tape.

Interestingly, during the first 24 hours after surgery, pain scores were consistently and significantly lower in the intervention group, with an average reduction of 25 per cent. In addition, those who were exposed to the tape had a small reduction in the need for strong opioid consumption during the first 24 hours after surgery. And the researchers estimate that, for every six patients receiving the intervention, one would completely avoid the need for postoperative opioids.

So in the interest of operating room harmony, it seems patients should listen to some soothing music, while birthday reminders for surgeons must be strictly verboten.