Why do we still find it so hard to talk about periods? 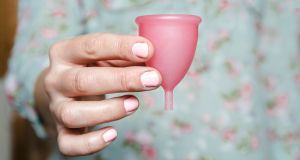 It was while working as an intern in a women’s organisation that Charlotte Amrouche first heard about the Mooncup, a reusable menstrual cup

It’s a Wednesday afternoon and around a dozen young women have assembled in a seminar room in the UCD Student Centre. They are seated in a circle and taking turns to add their names to a sign-up sheet being passed around. The room is quiet and very few of the women appear to know each other.

At the top of the room, Charlotte Amrouche waits patiently for the sign-up sheet to make its way back to her. The 29-year-old is the founder of Míosta, a project that facilitates menstrual education workshops in universities across Ireland and aims to “smash the shame and stigma around periods”.

Her work with Míosta is what brings her to UCD. Over the next two hours, she will guide those present through a discussion on periods, menstrual activism, and reusable menstrual products. But first, an icebreaker.

“To get us started talking about periods, and so everyone has the chance to say the word ‘blood’ or ‘period’ or something similar, we’re going to do this little poem,” Amrouche announces to the room.

Everyone stands up and are handed a tiny piece of paper containing a short excerpt from The Period Poem by Dominique Christina. The piece is addressed to a man on Twitter who voices his disgust at having sex with a woman on her period. “Dear nameless dummy on Twitter,” it goes. “You’re the reason my daughter cried funeral tears/When she started her period.” One by one, everyone in the room reads a few lines from the poem. Míosta is in progress.

Amrouche wasn’t always comfortable with speaking about periods. Growing up in Clonakilty, Co Cork, she received little in the way of menstrual education and it wasn’t until she went to university that she became interested in the subject. She recalls working as an intern with a women’s organisation and feeling awkward when a colleague casually asked her what menstrual products she used.

When Amrouche replied that she used pads and tampons, the colleague proceeded to tell her all about Mooncup, a reusable menstrual cup. Amrouche had never heard of it. That evening, she went home and started researching periods and alternative menstrual products. It sparked an interest in periods that she would carry through the remainder of her undergraduate degree.

In 2016, she moved to the Netherlands to do a master’s in gender studies. There, she wrote a thesis on menstrual activism in Ireland titled The Bleedin’ Irish Female Body. As part of a sustainable activism day, she facilitated a workshop - the first of many - on reusable menstrual products like cloth pads and menstrual cups.

Upon returning to Ireland, Amrouche realised that nothing similar was happening in Irish universities. She decided to hold another workshop on reusable menstrual products in NUI Galway, but quickly realised there was a demand for a broader discussion on periods.

“As soon as you create a space where people can talk about periods, they don’t really stop,” she explains. “They have so much to say. These workshops needed to be more than just the products. They had to be about creating that space for people to be able to talk about it. That’s how the workshops developed into what they are today.”

In 2018, she officially launched Míosta. According to Amrouche, the word “kind of means” “period” or “menstruation” in Irish. Since then, she has brought her workshops to universities across Ireland.

Each workshop follows the same structure. She begins by asking participants to map out their period journeys on a blank sheet of paper. This exercise allows people to reflect upon the good, the bad, and the ugly of their own experiences with periods. Here, women often discuss things like pain, embarrassment and cultural stigma.

Next on the agenda is menstrual activism. Participants are encouraged to identify issues facing people who menstruate on their university campus and come up with ways of drawing attention to them. (At UCD, the young women highlighted the need for greater access to free menstrual products.) For the final portion of the workshop, Amrouche introduces people to alternative menstrual products such as reusable menstrual cups, cloth pads and period underwear. It gives them an opportunity to interact with products that are usually only available online.

To date, Amrouche has focused her efforts on universities as opposed to primary or secondary schools. “I really like doing it with university students in some ways because I was one a few years ago,” she says. “It’s this interesting time where they have left home, left their secondary schools and are interested in different options. They’re exploring different parts of being a person - environmental things, body positivity, the sex education they never got in school.”

Amrouche says she has noticed “such a variance in the amount of knowledge or education” people have about periods. “You will have people in the room who are the same age and were educated in Ireland and yet have totally different understandings of the menstrual cycle or the products that are available,” she says.

It’s for this reason that she believes menstrual education at primary and secondary level is in need of reform. It’s something she would like to address through Míosta. “I would love to be doing research on what’s going on across Ireland and putting together an education programme that can be brought to all schools so we can have a level playing field,” she says.

She would also like to bring the workshops to other community spaces, and into more marginalised communities. She would like to work with medical professionals to get them up to speed on all things menstruation. “Personally I have had experiences of going to doctors in Ireland who don’t know what a menstrual cup is,” she says. “The other week I went to a new doctor and he couldn’t say the words ‘menstrual cycle’ without blushing or looking down.”

Additionally, she says there is a need for more research into women’s experiences of periods. “There is a huge lack of research in Ireland in terms of the experiences of menstruators across the country,” she says. “I think it would be great to collect qualitative research from different groups.”

While great strides have been made when it comes to breaking the silence around menstruation, Amrouche finds that the young women she meets can still approach the subject with trepidation.

“There are some people who are ready to talk about it,” she says. “They’re like, ‘Oh my God, I love periods and I want to talk about them.’ Then there are some people that I think are still a little bit shy or cautious and haven’t had these conversations yet. It’s like a muscle, right? If you haven’t exercised that before or if you haven’t talked about periods before outside of your group of close friends, it’s a little strange to start with.”

While we might view ourselves as a progressive country now, there are still taboos around menstruation in Ireland, she believes.