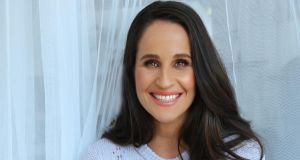 Katy Davis: ‘To live a big life, you have to take big leaps.’ Photograph: Yasmine Kateb

When Katy Davis took her first professional pay cheque at the age of 12, it was playing the orphan Annie opposite Twink’s Miss Hannigan at the Olympia in Dublin.

“I remember so vividly being introduced to her and she stood back and said, ‘Katy Davis. What a great stage name’,” Davis now recalls from her home in Los Angeles.

It appeared to be a formative moment; from then on, acting was Davis’s Plan A, and there was no Plan B.

Right after graduating from the Gaiety School of Acting in 2002, Davis took on two notable projects. Firstly, there was a two-hander with another recent drama graduate, Ruth Negga: a Pan Pan production called Amy The Vampire & Her Sister Martina. The other was the feature film Dead Bodies, in which she played the titular Dead Body, and girlfriend of Andrew Scott.

This can-do attitude has served Davis, who is from Clonskeagh in Dublin, in particularly good stead since. Nine years ago, she decided to move to Los Angeles on her own, without knowing a single person there.

Usually, Irish actors first try their luck closer to home in London, but that never appealed to her.

“So many people go there,” Davis says. “I had a conversation about it last week with some other actors, and they admitted that London can be lonely and rough going, and there’s still somewhat of a stigma attached to being Irish there. But I just always had this grá to try LA.”

Researching her options, Davis came across the O-1 visa, often granted to people who possess extraordinary ability in the arts, sciences or business. It’s a famously difficult visa to secure, usually doled out to big-name stars with a visible track record in the business. Davis decided to try her luck anyway.

“In August I applied, I got the visa in December and I moved in January,” she says. “I was in my 20s, and I didn’t want to regret anything. Besides, what’s the worst that could have happened, you end up going home again?”

From the outset, the bigger pond that is LA seemed to suit her: “I was really enamoured with the idea of it being a larger industry,” she says. “I adore the vibe in Ireland where everyone knows everyone, but sometimes it’s nice not to know everyone and to get an opportunity because you’re good, and not just because, ‘well, we didn’t give you the last thing, so we’ll give you this thing’. You’d be hard pressed to meet every casting director in LA.”

Talking about her first few weeks in a new city where she didn’t know anyone, Davis laughs: “My husband does not enjoy when I tell people stories about when I moved here first, he’s like, ‘I don’t know how you did it’,” she says. “I remember standing in [the supermarket] Ralph’s and just looking at all these new washing powders. It’s small things like that you don’t think about. But it was a short sharp shock, dealing with the real life stuff like getting a part-time job, getting a car, and not having the support system. But you know what? I just think to live a big life, you have to take big leaps.”

Did the reality of Los Angeles live up to her expectations? “Reality never really meets expectation in any situation,” she says. “Don’t underestimate the time it takes to build relationships in the industry and find your way.”

Dating in Los Angeles was another thing that took getting used to: “I do remember the closest I ever got to thinking that I needed to go back to Ireland was about a few months before I met my husband Phil,” Davis admits. “I found LA a difficult and strange place to start romantic relationships. From the moment I got there, it was very different to Ireland and I remember thinking, ‘I’m nearly 30, and I don’t think I can meet my person here. Maybe I need to not be here anymore’. Two months later, Phil appeared and we’ve been together ever since.”

Davis is now working steadily, married to her husband Phil and has a young son, with a second child due early next year.

The audition carousel in Hollywood, often regarded as pretty spirit-crushing stuff, is simply par for the course.

“I look at the auditions as the job, and then booking the actual job as the fun bit,” she notes. “If it’s an audition specifically for an Irish part, my chances are pretty low at getting it. I don’t look the way Hollywood has decided that Irish people look. They have an idea of what they want their character to look like, and I’ll be in the waiting room with so many girls with red hair and pale skin surrounding me, with sub-par Irish accents. I found that really hard in the beginning but I’ve made peace with it now.

“Usually, I go for American parts using an American accent, and sometimes they’ll change the part to an Irish person,” she adds, referring to one of the her more notable roles, that of Valkyrian Prime in the CollegeHumor Star Wars parody series Troopers.

“They’d never have written the part for an Irish character, so that was particularly cool,” she says.

In this particular audition room, being Irish worked in Davis’ favour: “It really fit with the story – my character is a fresh-off-the-boat secretary who has no idea that her office is the front for the underbelly of New York crime.

“There was even a little room for improv,” she adds. “If an American is writing the script there might be a phrase that’s a little off for an Irish person to say, so I got to say, ‘you know, it might work better if I say it like this?’ Edward was so collaborative and open and generous and though it’s a small part, I really felt part of the team.”

Filming began three months after her son was born, when Davis was still nursing. It’s the nature of freelance acting work.

“I never thought I’d be three months post partum and doing that job, but that’s the magic of the career I’ve chosen,” she says.

“I’ll be honest, I saw the film a few weeks ago, and to see myself on a 20ft screen, three months after giving birth, I felt so proud. Women are warriors. I don’t know how we’re not running the world by now.”

Motherless Brooklyn is in Irish cinemas from December 6th