Iwona Prusinska’s daughter began breathing on her own after two months at the hospital; at three months she was brought home 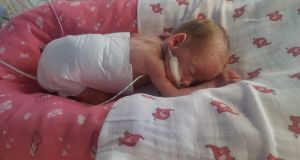 Sara was born one day shy of 24 weeks.

One mother who will be forever grateful to the “angels” at Holles Street is Iwona Prusinska, who lives in Portmarnock in Dublin with her husband, Wojciech, and their baby, Sara.

Last April when Iwona, who worked as a flight attendant, was 22 weeks pregnant, she was stressed and decided to take a week off work. On Good Friday, Iwona went to see her doctor at the Rotunda. While there, she decided to get a scan, to see the baby and make sure everything was alright.

The routine abdominal scan showed the baby was a healthy girl, and Iwona was delighted. The doctor also performed an internal scan – and discovered that Iwona’s cervix was so thin, the baby could “burst” anytime.

Babies who are 24 weeks or older (or more than 500g) have possibilities of survival, but before that their chances are much lower.

After speaking with the emergency department, Iwona was put in a hospital bed and stayed there all Easter weekend, worrying about her baby.

On the Tuesday a consultant recommended bed rest and she went home to bed and tried to relax.

On Thursday morning – when she was exactly 23 weeks pregnant – Iwona’s waters broke. She and her husband went to the Rotunda, and then went by ambulance to the National Maternity Hospital.

Sara decided to come six days later, on May 1st, just one day shy of 24 weeks.

“She came spontaneously, and very quickly. The ladies in the delivery ward were amazing. I was so frightened and they just told me, it’s okay, she’s coming. Everyone was just amazing. They were really helping me through it.”

Iwona was discharged a few days later, but Sara remained in the neonatal intensive care unit for more than three months. She went home on August 9th.

Iwona recalls: “When she was born I asked, is she going to be okay? The doctor said it’s up to her now, because she is a tiny baby. We’ll give her everything that we can’.

“The first 48 hours are crucial. They said that if she makes it through this, we’ll be on be on the safer side. So I was coming to see her every day with my stomach in one big knot.”

It took a couple of days for her milk to come in, and when it did Iwona was delighted. “On the third day, with the help of a nurse, I managed to get a little bit, so I was running to the unit with half a syringe of breastmilk for her.”

Iwona refers to one of the nurses as “my angel”, and says she was “unbelievable”.

After two months, Sara began breathing on her own. She initially fed via a tube but then began to bottle feed.

Sara weighs six kilos now, and is the same size as baby friends who, like her, were due to be born at the end of August. “She likes milk a lot. Once you give her her bottle, she’s happy out,” says Iwona.

Iwona said the care she received at Holles Street was amazing.

“The staff were very attentive,” she said. “You can see the horror on the faces of other families, and can see people crying, and the nurses are so kind. They are really sympathetic. For them, it’s not a job, it’s a calling. You can see how much they love the job.

“They are on their feet all the time, and they work 12 hours a day, but despite their tiredness you can see how amazing they are. The doctors explained everything to me, because they could see I was upset with all the procedures and even the blood taken from Sarah, she was so tiny and there were needles everywhere.

“Sometimes I had to excuse myself from the scene but they would come and check on me. They were just amazing.”