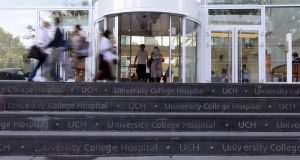 Weeks before they even took their first breaths, two babies had their spinal cords delicately repaired by surgeons in the first operations of their kind in the UK. The spina bifida surgeries were successfully performed by a team at London’s University College Hospital this summer on two babies while they were still in the womb.

Spina bifida is usually treated after birth, but research shows repairing the baby’s spine earlier can stop the loss of spinal fluid and lead to better long-term health and mobility outcomes. A 30-strong team carried out the two operations, co-ordinated by UCL’s Prof Anne David.

The surgery team from UCLH and the Great Ormond Street Hospital previously travelled to Belgium to train at a facility in Leuven, where more than 40 such operations have been carried out.

Spina bifida is a condition that develops during pregnancy when the bones of the spine do not form properly, creating a gap that leaves the spinal cord unprotected. It can cause a baby’s spinal fluid to leak and put brain development at risk, potentially leading to long-term health and mobility problems.

Spina bifida is a condition which affects about one in every 1,000 children born per year in Ireland, with this country having one of the highest incidences of spina bifida births in the world.

In the US, a recent major trial confirmed the health and mobility benefits of the pre-birth procedure. It showed a 50 per cent reduction in the need to have shunts inserted in the brain to drain fluid, a procedure that carries long-term complications. Brain and motor functioning are improved for non-shunted children, researchers said.

Children in the US study were also more independent after the surgery, Prof David said. “There were some children who had grown up following foetal surgery who were walking and you wouldn’t expect them to be walking if they hadn’t had it,” she said.

During the procedure, an incision is made in the womb in a precise location to access the baby’s spine and stitch closed the gap caused by spina bifida. The surgery, which takes some 90 minutes, carries a risk of premature labour, but less invasive keyhole methods are being explored. “We put the mum on some drugs that help relax them, but there is still a risk,” Prof David said.

She said a “foetoscopic” approach is being developed with the hope this will further minimise maternal complications. – PA