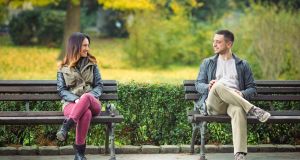 ‘Normal talking to a person while keeping the recommended social distance will be fine. Putting on a mask will be even better.’ Photograph: iStock

Coughs or sneezes may not be the only way people transmit infectious pathogens like the novel coronavirus to one another. Talking can also launch thousands of droplets so small they can remain suspended in the air for eight to 14 minutes, according to a new study.

The research, published in the Proceedings of the National Academy of Sciences, could help explain how people with mild or no symptoms may infect others in close quarters such as offices, nursing homes, cruise ships and other confined spaces. The study’s experimental conditions will need to be replicated in more real-world circumstances, and researchers still don’t know how much virus has to be transmitted from one person to another to cause infection. But its findings strengthen the case for wearing masks and taking other precautions in such environments to reduce the spread of coronavirus.

Scientists agree that coronavirus jumps from person to person most often by hitching a ride inside tiny respiratory droplets. These droplets tend to fall to the ground within a few feet of the person who emits them. They may land on surfaces like doorknobs, where people can touch lingering virus particles and transfer them to their face.

But some droplets can remain aloft, and be inhaled by others.

Elaborate experiments have revealed how coughing or sneezing can produce a crackling burst of air mixed with saliva or mucus that can force hundreds of millions of influenza and other virus particles into the air if a person is sick. A single cough can propel about 3,000 respiratory droplets, while sneezing can generate as many as 40,000.

To see how many droplets were produced during normal conversation, researchers at the National Institute of Diabetes and Digestive and Kidney Diseases and the University of Pennsylvania, who study the kinetics of biological molecules inside the human body, asked volunteers to repeat the words “stay healthy” several times. While the participants spoke into the open end of a cardboard box, the researchers illuminated its inside with green lasers, and tracked bursts of droplets produced by the speaker.

The laser scans showed that about 2,600 small droplets were produced per second while talking. When researchers projected the amount and size of droplets produced at different volumes based on previous studies, they found that speaking louder could generate larger droplets, as well as greater quantities of them.

Although the scientists did not record speech droplets produced by people who were sick, previous studies have calculated exactly how much coronavirus genetic material can be found in oral fluids in the average patient. Based on this knowledge, the researchers estimated that a single minute of loud speaking could generate at least 1,000 virus-containing droplets.

The scientists also found that while droplets start shrinking from dehydration as soon as they leave a person’s mouth, they can still float in the air for eight to 14 minutes. “These observations confirm that there is a substantial probability that normal speaking causes airborne virus transmission in confined environments,” the authors wrote in the study.

In another recent study, the same authors showed that just articulating certain sounds can produce significantly higher amounts of respiratory particles. The “th” sound in the word “healthy,” for example, was a very efficient generator of speech droplets. Another paper, published in January by researchers from the University of California, Davis, found the vowel sound “e” in “need” produces more droplets than the “a” in “saw,” or “o” in “mood”.

What researchers don’t yet know is whether all speech, cough and sneeze droplets carrying virus particles are equally infectious, or if a specific amount of virus needs to be transmitted for a person to get sick by breathing it in.

But the new study adds to the case for maintaining a physical distance from other people to help slow the spread of coronavirus, said Linsey Marr, a professor of civil and environmental engineering at Virginia Tech who was not involved with the paper. “Based on this and other evidence, it would be wise to avoid extended face-to-face conversations with other people unless you are far apart and in a well-ventilated space, including outdoors,” Marr said.

The study also highlights the importance of wearing masks during social and other interactions. “The risk of talking to one another will probably be lower than being exposed to a person who is not wearing a mask and openly coughs and sneezes,” said Dr Werner E Bischoff, the medical director of infection prevention and health system epidemiology at the Wake Forest School of Medicine. “Normal talking to a person while keeping the recommended social distance will be fine. Putting on a mask will be even better.” – The New York Times