Stonewalling: What to do if your partner won’t talk to you 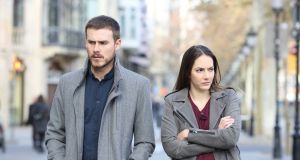 The person doing the stonewalling – the silent one – is probably ‘flooded’ emotionally. Photograph: iStock

If you live in a city it’s not rare to see couples fighting on the street, unless you happen to dwell in the sort of area where rows go on behind discreetly closed doors and triple-glazed windows.

The scenario is usually that two people are walking separately, one complaining loudly and sometimes incoherently, and the other silently refusing to acknowledge their partner’s complaints.

Outdoors or indoors what’s happening is essentially the same: one person is stonewalling and the other is getting madder and madder because they are being treated as if they’re not there.

Basically, the silent one is building a wall between himself or herself and the partner. The partner is battering away at the wall trying to break it down.

The stonewaller isn’t necessarily worse than the person shouting the odds and vice versa. People have ways of fighting in relationships, these ways never look elegant and this is one of them.

The person doing the stonewalling – the silent one – is probably “flooded” emotionally. Their blood pressure is up, stress hormones like adrenaline and cortisol are surging through their bloodstream and they may even be caught up in the fight, flight or freeze response to stress. As journalist Ellie Lisitsa put it in an article in the Gottman Relationship Blog, “When that happens, it is impossible to continue discussing the issue at hand in a rational and respectful way; you’re simply too physiologically agitated to do so.”

Stonewalling has a similar effect on the person who is making the complaints. Their blood pressure and level of distress also go up.

A study of physiology and emotions dating back to the 1980s suggests that 85 per cent of those who stonewall are men. Any counsellor who has sat in a room with a conflicted couple would find that easy to believe.

People who stonewall may look like they are doing and feeling nothing but that’s not the way it is. Relationship researchers John and Julie Gottman find that the stonewaller, though silent, is thinking about what is going on. These thoughts keep the level of distress high and men are especially prone to this. As Lisitsa puts it, “men are more likely to rehearse distress-maintaining thoughts than women”.

In response to these thoughts, men keep stonewalling. In the Gottman’s studies, women were more upset than men when a partner stonewalled.

They also found that when women do the stonewalling there is a strong chance the marriage is going to end in divorce.

What’s to be done?

First of all, not fighting isn’t really an option. Couples fight, whether in the form of bickering of full-blown rows.

The Gottmans suggest that when one partner “checks out” there is no point in the other partner pressing forward. Instead they need to suggest a break in the argument. Easier said than done? Yes but more useful than battering against a stone wall.

Couples who argue a lot could agree on a signal when one partner needs to call time out. You need to work out your signal at a time when you are not fighting. It doesn’t matter what the signal is – it just needs to be respected by both sides.

The break in the row, they suggest, needs to go on for at least 20 minutes because that is how long it will take for each person to calm down physically. Also, it is important not to make things worse for yourself by circulating hostile thoughts in your head during that break. Instead you could focus on your breathing, take a walk or do something that you find calming and soothing.

If stonewalling is a feature of your disagreements, it might help to remember this: stonewalling, apart from making everybody miserable and upset, can be a symptom of relationship that is going to end up in a solicitor’s office.