The secret to becoming an early morning runner

If you are curious about these morning exercisers, why not give yourself the rest of June to try it out 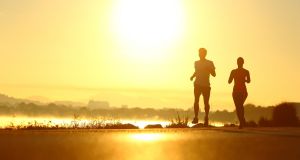 June is the perfect month for this kickstart morning running – we have warmer days and bright mornings.

If you are reading this hoping to be inspired by an early morning running habit then I’m afraid you have come to the wrong place.

I’m am (still) an aspiring morning runner after many half-hearted attempts to kickstart a morning running routine over the years. Any time I have pushed myself up and out of bed to run I feel wonderfully smug and energetic for the whole day. There is an incredible feeling of invincibility having completed a morning run and the day feels like a success even before you have had breakfast. But somehow I never organise myself enough to make it a regular routine. Life takes over and morning runs drop back down the list of priorities.

There are some people who hop out of bed in the morning excited about their morning run. They don’t give it a second thought. They are out the door before they have time to press the snooze button.

But they are the exception.

Most morning runners I have spoken to are just sensible and practical runners. They run in the morning because they know that it’s the only time of the day they have control over. Once work and family life starts and this morning window passes, they cannot guarantee they will have, or make, time to run.

Apart from feel good factor, the main reason I want to be a morning runner is to avoid having to think about my evening run all day. Morning runners don’t spend the day looking out the window wondering if it will be raining later. They don’t have to think twice about whether a late afternoon cup of tea and snack will impact their running stomach. They don’t try and convince themselves all day that they should rest today and run tomorrow. They also have evenings to themselves or at least the illusion of evenings to themselves. Basically they make their decision to run when their body is fresh early in the day, not when it is tired and has reached willpower and decision fatigue by 5pm.

Most morning runners I know are pretty fabulous but they are very disciplined. The most important part of their run is preparation. If you have to think too much in the early morning hours, you might just decide to go back to bed. So having an alarm set, running gear laid out, a running buddy to meet or indeed a destination like work at the end of the run will leave much less room for making excuses. When you have to go you will. When you have an option not to go then it’s easy to put it off until later or indeed tomorrow.

These morning runners inspire me yet I have all the excuses. I know it takes planning, discipline and an ability to not listen to your early morning self but once you out the door all of that is forgotten. To get the early morning running buzz and clear head it brings, I need to change things up if I’m ever going to join the club. So the time has come. This month I’m going to give it a proper go.

This June I’m going to become a morning runner. Set yourself up for success they say. So I will. I’m going to start when I am on holiday as I love leisurely running on holiday and I will finish each run at the boulangerie before bringing breakfast home. It might not be real life but it will be a great kickstart. When I’m away I cannot blame my work, my husband’s work, traffic or packing a school lunch as the reason I don’t have time to go in the morning. I will, in theory, be a lady of leisure for a week, albeit with a toddler in tow. If I don’t attempt it now, this summer will pass by just like the rest of them.

I’m saying it out loud so you will keep me on track. By the time you read this I’ll have 10 days of June behind me, I’ll be back home and hopefully will have 4 early morning French runs behind me. I’m not over committing, not setting any crazy schedules, just really doing all I can to make it enjoyable and something I want to maintain. And if I can manage it for the first few weeks of June, the next few should be just that little easier. Who knows by the end of the summer maybe I’ll be one of the smug runners who had their run ticked off before breakfast and not have it hanging over them for the day, or dare I say it, the next day!

June is the perfect month for this kickstart, I’m telling myself. For a start we have warmer days and bright mornings. While I admire everyone who enjoys getting up in the dark to run, that would be one step too far for me, so a summer start is what I need. I also need for it to be enjoyable and manageable. I don’t want it to take over my life, just make my days feel great.

If you are curious about these morning exercisers, why not give yourself the rest of June to try it out. These months pass by fast and putting a deadline on a challenge is enough to get us started. You, and I, can decide if morning running works for us. There is nothing stopping us turning off the early alarm in July if it’s not worth the effort. But if you are just a little curious, and envious, of those morning warriors, let’s join them at their game this month.

– Mary Jennings is founder and running coach with ForgetTheGym.ie. Her new book Get Running, published by Gill Books, is out now.

The Irish ice-cream maker who was diagnosed with diabetes
10