Dubliner calls for greater research into disease; says only 3 nurses looking after those affected nationwide 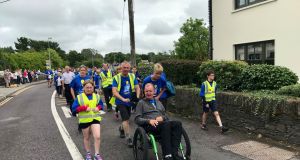 Fr Tony Coote arrives into Ballydehob having finished his arduous trek which he undertook over the course of the last month. Photograph: Jonathan Healy

A priest who “fell to the floor” with shock earlier this year when he was diagnosed with motor neuron disease (MND), on Monday completed a 550km journey from Donegal to Cork raising close to €250,000 to aid research into the condition.

Dublin priest Fr Tony Coote (54) said he never thought he would bounce back from the shock of his diagnosis to completing a walk of Ireland via a mountain trike.

The former UCD chaplain said he was overwhelmed by the reception he received in Ballydehob, west Cork having finished his arduous trek which he undertook over the course of the last month.

“What a warm welcome I received from Ballydehob and west Cork. Crowds of people on the streets and led by three huge horses. Also I had a fantastic reception in the community hall,” he told RTÉ Drivetime.

Fr Coote was also congratulated on his arrival in Ballydehob by the Mayor of County Cork, Cllr Patrick Gerald Murphy, who has been in a wheelchair since a car crash in 1993.

The priest, who is based in the Mount Merrion and Kilmacud parishes in south Co Dublin, had played squash twice a week and considered himself to be a healthy man. In November of last year he suffered a fall and then he started having a problem with his left hand. An MRI scan indicated that he had MND and his health deteriorated rapidly.

‘I went in to shock’

“Like many people who are told bad news I went in to shock. It was a devastating type of thing. When you hear motor neuron you hear ‘No cure available.’ That is why I undertook the walk.

“Because firstly the medication for MND is 24-years-old and secondly there are only three nurses caring for those people throughout the country paid for by church gate collections with no central funding from the Government at all.”

Fr Coote says research in to MND is vitally important as people with the condition are put on one generic drug. A breakthrough is needed to provide more specialised medications to assist patients.

“More research will (hopefully) go in to slowing down this illness more. The illness is very rapid and debilitating.”

Fr Coote has lost the control of most of his left hand and his left leg and he now uses an electronic wheelchair. He says he can no longer tie his laces or put on his socks and he finds it very difficult to put on his shoes. He admits his independence has been compromised over a short period of time.

However he says he is treating MND as a challenge and is trying to stay positive.

“When I get a challenge I always face it. I get up every morning and I face the day and get on with it. That is what keeps me going. We have the website. Anyone can donate with the guarantee that the money either goes to research or the care of motor neuron.”

Under the banner of “Walk While You Can” Fr Coote set off on his journey from Letterkenny, Co Donegal on July 10th. Countless walkers and well wishers joined him for sections of the route.

Contributions can be made to the fundraising campaign at http://wwyc.ie/

Read: ‘Walk While You Can’ with motor neuron disease