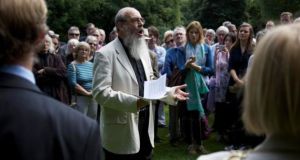 The Government is committed to early ratification, and, despite Brexit consuming so much of the department’s time and resources, negatively, I hope in a very positive way this treaty can be ratified by Ireland before the end of the year.’ File photograph: Sara Freund/The Irish Times: ‘

It would be illegal for most American military flights to pass through Shannon airport under a new international nuclear weapons treaty which the Government is committed to ratifying, the president of the Irish Campaign for Nuclear Disarmament (CND) has said.

Rev Prof Patrick Comerford was speaking at a commemoration ceremony in Dublin to mark the 73rd anniversary of the atomic bombing of the Japanese city of Hiroshima during the second World War.

An estimated 80,000 people were directly killed by the bomb dropped on Hiroshima, with casualties reaching 140,000 within a year. About 15,000 nuclear weapons remain in the world today, according to CND.

About 40 people attended the ceremony at Merrion Square Park, where a wreath was laid at a cherry tree planted by Irish CND in 1980 in memory of those who died as a result of the bombing.

In his address, Prof Comerford said we were living in “a fear-filled and an awesome time”.

“According to the Bulletin of the Atomic Scientists earlier this year, the Doomsday Clock now stands at two minutes to midnight,” he said.

Prof Comerford noted that last month marked the signing of the Nuclear Non-Proliferation Treaty (NPT) in Moscow, London and Washington 50 years ago on July 1st, 1968.

That process had been launched 60 years ago in 1958 by Frank Aiken, then minister for external affairs, and it remains “one of the singular achievements of Irish diplomacy, of Irish foreign policy, of Irish engagement internationally.”

Prof Comerford said Ireland was today once again at the forefront, promoting the Treaty on the Prohibition of Nuclear Weapons, or the Nuclear Weapon Ban Treaty.

The treaty was passed on July 7th last year and in order to come into effect, it needs the signature and ratification of at least 50 countries.

Legislation to ratify it and give effect to its provisions is being prepared by the Department of Foreign Affairs.

“Despite opposition from Nato member states to the treaty, Ireland was one of the strongest proponents of the new treaty during last year’s negotiations,” Prof Comerford said.

“The Government is committed to early ratification, and, despite Brexit consuming so much of the department’s time and resources, negatively, I hope in a very positive way this treaty can be ratified by Ireland before the end of the year.”

He said that once it entered into force, there would be “a clear international prohibition on acquiring, stockpiling and sharing nuclear weapons”, which had been a major short-falling in the earlier treaty.

The CND president also suggested this meant it would also be “illegal for most of those American overflights to pass through Shannon Airport”.

Speakers at the event were introduced by Irish CND chair Dr David Hutchinson-Edgar and included Green Party councillor Claire Byrne, who attended on behalf of the Lord Mayor Nial Ring. There were also contributions of music and poetry from Irish and Japanese artists.

Kotoha Itakura, political attaché at the Japanese embassy in Ireland, read the poem Let us be midwives! by the Japanese poet and peace activist Sadako Kurihara, who survived the Hiroshima bombing.