Ask the expert: He cries, kicks and screams at the slightest thing and seems exhausted all the time 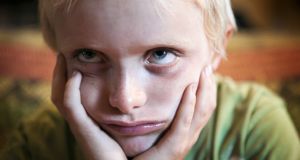 Over-tiredness is a big factor in tantrums and this is often missed as many over-tired children find it hard to settle, resist going to bed, and become very fractious during the bedtime routine. Photograph: iStock

Question: I find myself at the end of another stressful day where it’s tantrum after tantrum from my six-year-old son (who is a twin). Today, I had to drop my mother home after minding my 2½-year-old and he went ballistic, kicking and screaming that he didn’t want to get in the car (for the five-minute drive). I stayed calm trying to coax him, but eventually the only way I got him out of the house was by turning on the alarm. He came running out and bawled the whole way, kicking the back of my seat. He was also hitting himself and trying to bite himself.

When it came to bedtime and I was telling them to get their pyjamas on, he had another tantrum, bawling and screaming that he didn’t want to go to bed or put pjs on.

When I had the other two in bed, I came down to him and tried to reason with him that it’s time for bed. He continued to refuse and so I told him he had a choice to walk upstairs himself or I’d carry him up – which I ended up doing, with him kicking and screaming.

He is an early riser – any time after six, but goes to bed at 7ish which I think is early enough, but his teacher tells me a lot of the time that he is so tired in school. He is exhausted at home most evenings too.

He loves getting out on his bike, which he does most evenings with myself or my husband as we feel he needs to let off steam – when we get the chance we take him on his own to give him one-to-one time.

I had a parent-teacher meeting last week and the teacher told me overall he’s getting on well but requires a lot of reassurance and isn’t mixing very well and that she would try a “buddy system”.

His twin has mild ASD (autism spectrum disorder) and has an SNA (special needs assistant) who he was becoming dependent on too but since then they have been split up and sit at different tables. I don’t know if that is significant.

Answer: Dealing with ongoing and repeated tantrums from children is among the most challenging problems you might have to deal with as a parent. Tantrums can be infuriating and wearing and easily deplete your connection with your children. Also, tantrums can beget tantrums – as one is unresolved it sets up the same conditions for the next one. In responding, the key is to pause and take a step back so you can understand what is going on for your child. I think you are right with your hunch that tiredness may be an important factor.

In my experience, over-tiredness is a big factor in tantrums and this is often missed as many over-tired children find it hard to settle, resist going to bed, and become very fractious during the bedtime routine. Over-tiredness could also explain how he found it hard to go out in the car to drop his nana home. In addition, the fact that his twin has special needs strikes me as also potentially significant. As a twin, it can be hard to ‘compete’ and get the attention of your parents and this can feel harder when their twin has additional needs.

The fact that he has moved tables in school and been separated from his twin and SNA may also be a contributing factor. Understanding that he might be feeling on the margins and need some positive attention may be part of the solution. You can help address this by supporting the teacher in setting up a “buddy system” and arranging one-to-one play dates in the home for him where he gets some good time and attention.

When tackling overtiredness, the general rule is to aim for an earlier bedtime and to create a longer, relaxing routine in the run-up to it. Within this routine, make sure to include a relaxing time with you or his dad such as a bedtime story that allows you to connect at the end of the day. It is also worth reviewing his total routine from getting out to school in the morning to coming in from school and then until bedtime to see where there are trigger times for tantrums (that might be avoided) and to see if there are opportunities to make his day more relaxing.

Including physical exercise such as getting out on the bike with him to “let off steam” is an excellent idea. Ensuring there is plenty of exercise and out door activities in his routine will help him relax and also improve his sleep. Also, these times can be great ways to have one-to-one enjoyable time with him, which will counterbalance the stress of the tantrums.

Have a step-by-step plan to deal with tantrums

When faced by tantrums, it is important to avoid using coercive tactics such as dragging him screaming to the car, as this will increases his agitation and can become a serious problem if used a lot. Instead, think through a calm step-by-step plan for how you will get through tantrums in a gentle and cooperative way. For example, when he refuses to come upstairs to bed, could you instead remove any stimuli downstairs and just go up yourself and wait for him to come up – you sit and read as you wait, so you give the message that you are relaxed and not getting hooked in. Also, are there ways you can coach and reassure him to help him calm down when he is in the height of a tantrum? Could hugs and soothing work to help him calm down (especially if over-tiredness is factor).

Sometimes, encouraging him to speak might help – “use your words to tell me your feelings” or repeating a gentle mantra – “shh now, let’s calm now”, that teach him the skills to calm down. Remember, when he does come out of a tantrum, you need to find a way of returning positive attention to reassure him (and yourself) – “all is fine now, lets have a nice rest in the bed”.

When handled in gentle responsive ways and once the underlying issues are addressed (eg tiredness), tantrums generally fade over time. You might also want to avail of a parenting course such as the Parents Plus Early Years programme, which will provide you with more detailed information and support. Do contact your primary care services to see what might be available.

– John Sharry is founder of the Parents Plus Charity and an adjunct professor at the UCD School of Psychology. He will be delivering a number of Positive Parenting workshops in Cork on January 18th and 19th, in Galway on February 16th and in Dublin on March 7th, 8th and 28th. See solutiontalk.ie for details

Doctors on Covid-19 frontline: ‘What I miss most is normal human contact’
7