My most memorable birthday? The one when my son nearly died 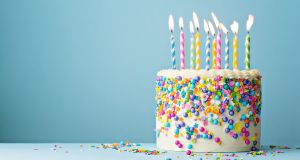 Everyone deserves at least one day per year that’s all about them. Photograph: iStock

It was my birthday a few days ago. Birthdays in this house are a huge deal, eagerly anticipated for weeks in advance, almost as much by the siblings as the birthday child themselves. That may be something to do with the “present for the person whose birthday it’s not” tradition that we introduced, never quite factoring in how many children that would eventually include. Or it may just be because my kids are highly excitable by nature and any excuse will suffice.

Similar enthusiasm is shown for their parents’ birthdays, and so I was reminded in the week leading up to it how many days were left and asked daily if I was excited.

To which I replied “I can’t wait” each time, which was really an incomplete sentence. What I really meant was “I can’t wait until it’s over”.

I’m a great believer that everyone deserves at least one day per year that’s all about them. I say this to anyone who tries to play down the anniversary of the day they were born, and my kids know it’s my mantra – because we live it out, for them anyway.

“Monkey see, monkey do,” as the saying goes. I try to hide my disdain for my own birthday from them for fear they might one day become equally negative about any of the seven best days of my life.

And so the day is all about distraction – for me, partly from the fact I’m getting older, a privilege, I realise, denied to many. It’s not just an age thing, however: it’s over-sentimentality kicking in again as it does on my children’s birthdays, New Year’s Eve and any time I have to do a wardrobe clear-out.

Growing up, my mother always took us to see Santa on my birthday, so I continued the tradition with my own family – even the teens go along. It’s what the day has largely become about. The distraction suits me, and the littles get to be excited.

For many years I tried to combat the age fixation by visiting one of my best friends in Tyrone around my birthday. She’s older than I am, as I jokingly pointed out, so that made me the young one. Her rather great company was an added bonus.

It was a visit to this friend one year that changed the memories I now associate with my birthday. I received the ultimate birthday present – one I never expected I would need.

My youngest, at the time, was six months old. He had a cough but he had seen the doctor, who felt he was fit to travel. He was my third child, so taking care of a baby with a cough wasn’t something new to me. We loaded the car and headed for Strabane.

Excitement levels were high, as they tend to be when you catch up with a friend you don’t see anywhere as often as you’d like. Her lovely mum, now sadly no longer with us, insisted both couples go out to celebrate my birthday. She was happy to babysit and promised to ring if the baby was upset.

A couple of hours later we returned to a house in panic. There had been several attempted phone calls but a poor signal had meant none was received. My friend’s parents had already called the emergency doctor – my baby son was struggling to breathe.

We were sent straight to the hospital, where a medical team was waiting. Surrealism took hold as my baby was ventilated. “It’s my birthday,” I said to the doctor, feeling a need to explain why my friend and I were dressed to the nines. “He only had a cough. He’d already seen a doctor. I’d never have left him otherwise.”

A nurse gently suggested that we contact family back in Dublin. “He’s seriously ill,” she added, recognising my confusion at it all. “We’re going to have to transfer him to Belfast. ”

I wasn’t allowed to travel with him in the ambulance, but I was told how lucky I was that I happened to be in the North that night, as there were no children’s intensive care beds available in Dublin.

I was also told how lucky I was that my friend’s mother reacted so quickly. I have her to thank that he’s still here today.

We went to Galway the weekend before my birthday this year – partly for distraction but mostly to ease the guilt I’d felt about not managing to take them on any kind of holiday. Both were accomplished. There was none of the drama of previous years, but there was plenty of fun, laughter and pleasure in the simple things – and rain!

It was the sort of birthday memories are made of, which nearly make you think they’re not so bad.

Covid-19: Those planning to visit older relatives at Christmas ‘should stop socialising now’