‘Suicide is like an epidemic here in west Belfast; there’s about one a week’

Northern Ireland has one of the highest suicide rates in the world and a leading cause, say experts, is post-traumatic stress disorder after years of violence 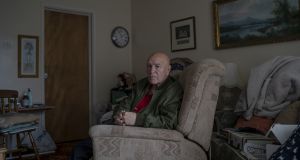 To this day, Joe Holbeach battles the demons that tell him to end his own life.

Twenty years after the Good Friday agreement, Northern Ireland has one of the highest suicide rates in the world. Experts point to numerous factors – including poverty, underfunded mental-health services and a recent uptick in paramilitary violence. But a leading cause, they said, is post-traumatic stress disorder (PTSD).

Holbeach, who has received a diagnosis of PTSD, is among the thousands who were caught in the crossfire of the violence in Northern Ireland, in which bombings, shootings and maimings were enmeshed in daily life for nearly three decades. His PTSD manifests in the form of flashbacks, feelings of intense emotional stress, depression and anxiety, which lead to suicidal behaviour. On some days, his suicidal thoughts become so incessant that he struggles to see certain objects as anything but tools he could use to kill himself.

In 2001, when he reached out to his local mental-health hospital in Lurgan, he said he was turned away because, as he admitted, he had been violent toward another patient during his last admission. He said the rejection pushed him over the edge. “I told them I was going to kill myself, but they still didn’t take me in,” he recalled recently in his living room, where family pictures decorate the mantelpiece. “I couldn’t take it. I cracked.”

For anxiety disorders and PTSD, 22 years was the average time between symptom onset and treatment

Northern Ireland has the highest suicide rate in the United Kingdom, with 18.5 age-standardised suicides per 100,000 people in 2017, a figure that puts it among the top 15 countries in the world, the Northern Ireland Statistics and Research Agency found. The rate for men is far higher, approaching 30. The rate in England was half that, at 9.2 per 100,000 people. The Republic of Ireland has historically had a high suicide rate as well, though it has seen a steady decrease in recent years. Most striking is that the suicide rates in Northern Ireland have doubled since the peace deal more than two decades ago.

A spike in the rate from 2004 to 2006 reflected a change in recording practices by the Coroner’s Service that synchronised Northern Ireland with Britain. In the following years, the numbers tracked generally higher, prompting mental-health experts to carry out research that found a direct link between suicidal behaviour and the traumatic events experienced by thousands during the conflict.

In 2017, the highest number of deaths by suicide in Northern Ireland occurred among men ages 35 to 44. They grew up in the shadow of the war, many of them experiencing daily violence, forced migrations, loss of jobs and deprivation.

“For anxiety disorders and PTSD, 22 years was the average time between symptom onset and treatment, because people didn’t want to talk and ruminate over the terrible things they went through,” says Siobhan O’Neill, a professor at Ulster University who carried out a detailed study into mental health in Northern Ireland’s history.

Of 28 countries and regions that participated in the World Mental Health Survey in 2017, Northern Ireland had the highest rate of PTSD.

The uncertainty over Brexit and the collapse of Northern Ireland’s power-sharing coalition has empowered dissident groups in recent years and threatened the region’s fragile peace. Paramilitary-style punishment shootings and beatings in dissident-run, deprived areas – primarily to punish young people for things like petty crimes and drug dealing – rose 60 per cent last year, an increase that experts say has contributed to the high suicide rate.

I fell to the floor, and it was like asteroids coming at me from space. You’re dead, you’re dead – I believed I was dead

Bernadette O’Rawe, an activist who provides support for victims of paramilitary shootings in west Belfast, pulls out pictures of some of the worst casualties: a young boy with bloody bullet holes the size of golf balls under his kneecaps, another with a bulging ripped lip. Many of the victims are left crippled.

Of the nine victims she helped, three took their own lives. “Suicide is like an epidemic here; there’s about one a week,” O’Rawe says.

After leaving the Lurgan hospital in 2001, Holbeach tried to kill himself, but was saved by a passer-by. He had flashbacks to November 8th, 1987, the day he went to Enniskillen to attend a memorial service for British soldiers and a bomb exploded yards away from him.

“Everyone had gathered – friends, family, children – and then suddenly there was a big bang,” he recalls, scrunching his face up tight as if reliving the moment. His hands start to shake. “I fell to the floor, and it was like asteroids coming at me from space. You’re dead, you’re dead – I believed I was dead.”

Deadliest of the conflict

The attack was among the deadliest of the conflict, killing 12 people and injuring more than 60. “I dug myself out of the rubble,” Holbeach recalls. “It was like I was in the middle of the desert in a sandstorm – stepping over bodies flat on the ground like cardboard, blood and broken limbs everywhere.”

Libyan dictator Muammar Gaddafi supplied Semtex to the IRA during the conflict, and victims of the bombings have long campaigned for the British government to release billions in frozen Libyan assets to compensate victims. Holbeach says that beyond obtaining justice, he could use the money for private medical care after he was left injured by the bomb. About 5 per cent of Northern Ireland’s health budget is spent on mental health, half of the 13.5 per cent allocated in England. Last month, Northern Ireland’s Department of Health published a suicide prevention plan that aims to reduce the number of suicides by 10 per cent over the next five years, but experts worry there is not enough funding to fully implement the strategy.

A culture of silence around the conflict has also contributed to the issue, as many of the victims are reluctant to ask for help. “It wasn’t safe to speak about so many things,” says Róisín Martin, who worked as a nurse during the conflict. “Even if you recognised that you needed to, you didn’t know who anyone really was or what their beliefs or involvement was in the paramilitary world.”

Many people would not confide even in their families and friends or share details of the atrocities they witnessed on a daily basis. In some cases, experts found that parents could transmit their post-traumatic stress to their children, even if the child had never experienced a traumatic event.

Only now, 20 years later, are people starting to confront the emotions tied to their experiences. “I feel that we were so used to living with the effects of the stresses, it was just part of who we were,” Martin says.

After her 15-year-old daughter killed herself in 2005 in Co Tyrone, Catherine McBennett started the Niamh Louise Foundation, a suicide support charity in her daughter’s name, which she says has made a big difference in raising awareness. “But we still have a long way to go, especially in rural Northern Ireland,” she says.

Eamonn Baker, who works for a peace-building foundation and who has dedicated more than three decades of his life to conflict resolution in the area, is still haunted by the events he experienced in his hometown, Derry, on January 30th, 1972 — Bloody Sunday.

Growing up, like many who lived through the conflict, he dealt with the trauma by turning to alcohol. But now he takes a positive approach by working to bring people from both sides of the conflict together to establish a dialogue. For many, the process of reconciliation has been cathartic, but the trauma of the conflict is still so deeply embedded in society that many still struggle with the emotions tied to their experiences.

“The past sits like a weight on the present,” Baker says. “It’s a big challenge to live in the present.” – New York Times

Paul Flynn: I’d crawl over a mountain of nouveau-riche club sandwiches for a nice toastie
9