IVF’s slow Irish birth: ‘It was not greeted with open arms’

In a land where bishops objected to ‘the sin of Onan’, first IVF baby arrived only in 1986 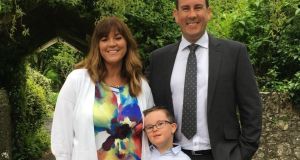 “When it works it is the best thing in the world.” Above, Marie, Brian and Padraig (8) O’Callaghan

Louise Brown, the first in vitro fertilisation (IVF) baby, was born 40 years ago today at Oldham General Hospital in England.

Known at the time as the first “test tube” baby, the circumstances of her conception, in which the egg is fertilised in a test tube and then inserted into the womb, was viewed at the time as a miracle of modern medicine.

She was the only one of 457 egg collections to end in a live birth.

Her birth gave hope to millions of infertile couples. To date an estimated six million babies have been born worldwide as a result of IVF.

IVF was slow to come to Ireland: the first baby was born on January 14th, 1986, in St James’s Hospital at a clinic run by Prof Robert Harrison.

The birth of a baby girl made the front page of The Irish Times. Her identity was never disclosed. The Medical Council only approved IVF after years of wrangling, and only then strictly on the basis that it would be offered exclusively to married couples.

The programme that led to the birth of Ireland’s first IVF baby had been suspended in May 1985 pending a review, but a successful conception had already taken place.

The first successful programme of IVF in Ireland was from a clinic in Clane, Co Kildare, founded by Dr Tony Walsh in 1987. Dr Walsh said it was the first “real IVF clinic” in Ireland.

It is still very much in the private realm. There is always talk about bringing public funding, but I’m not holding my breath

Dr Walsh went on to found the Sims clinic in 1997.

Dr John Kennedy, the medical director of the Rotunda IVF and Sims clinics, said 5,000-6,000 IVF cycles happen in Ireland every year though some couples go abroad because of the cost.

He said age is the biggest factor in successful IVF and the chances of successful pregnancies can be anything from 70 per cent for younger women to just 1 to 2 per cent in older women.

He said the cost is still a hugely prohibitive factor in Ireland with each cycle costing more than €5,000. Successive Governments have hinted at making IVF publicly available, but nothing has come of it.

“It is still very much in the private realm. There is always talk about bringing public funding, but I’m not holding my breath,” he says.

Case study: ‘We have the best gift ever’

Many couples who go through IVF experience a rollercoaster of emotions. For Marie and Brian O’Callaghan, who live in Limerick, the journey lasted four years and seven cycles of IVF, costing €50,000 in total.

Marie, who is originally from Glasgow, was diagnosed with extensive endometriosis when she was 32.

When you are going through it, it is the hardest thing ever, but when it works it is the best thing in the world

She and Brian began IVF treatment in 2006. They had four cycles of IVF, resulting in four pregnancies, but all were lost early. Two further cycles also proved fruitless.

Finally, on the seventh attempt, they had a baby, Padraig, who was born in 2010, though even that pregnancy was a close call.

Padraig is now eight and will soon begin second class in primary school.

IVF, says Marie, transformed their lives “one million per cent”.

“It’s the most wonderful thing that could happen to us. We have the best gift ever [Padraig],” she says.

“During those four years, you live and breathe it, but now you forget everything you went through, because [Padraig] is here.

“When you are going through it, it is the hardest thing ever, but when it works it is the best thing in the world. You forget the pressure, the cost and the emotion. We can’t imagine life without him.”

Read: Miscarriages and IVF: chasing a rainbow baby (and when to stop)

Ross O’Carroll-Kelly: ‘We’re having a fancy dress porty and I’m going as the wife of a philanderer’
6