Fianna Fáil leader says how Taoiseach operates 'all about optics, all about spinning’ 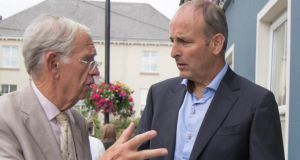 Taoiseach Leo Varadkar was “chancing the arm” by suggesting a general election should be held in 2020, Fianna Fáil leader Micheál Martin has said.

Mr Varadkar last week proposed that the confidence and supply agreement with Fianna Fáil should continue for two years beyond the current agreed term which concludes at the end of the year.

The two party leaders met to discuss the budget, Brexit and the confidence and supply deal which underpins the Fine Gael-led minority government with Fianna Fáil’s support.

Speaking on the sidelines of the MacGill Summer School in Glenties, Co Donegal, Mr Martin took issue with the leaking of the proposal to extend the agreement until 2020. He suggested the Taoiseach was trying to create instability by increasing speculation about the next election.

“I’m not going to be governed by political manoeuvres by Fine Gael because I think the public are not interested in the bubble of Leinster House and the games that some politicians get up to. This is too serious,” he told reporters.

Let’s keep as calm as we can here...Let’s not run away with ourselves

Mr Martin said the 2020 proposal was “thrown out” at the meeting by Mr Varadkar. “It wasn’t discussed. He threw it out, but there wasn’t any serious discussion.There’s a bit of chancing the arm going on there.

“For the Taoiseach then to leak one aspect of [the talks] betrays and illustrates a certain dimension to how he operates. It’s all about optics, it’s all about spinning. There’s a lack of substance there.”

The Fianna Fáil leader added: “If you’re serious about discussing issues to facilitate government you don’t actually behave like that.”

Mr Martin also said there was “no need” for a emergency national meeting on the identity of his party, as suggested by Carlow-Kilkenny TD John McGuinness.

Mr McGuinness said he believed the party has been damaged by being “handcuffed” to the Government by the confidence and supply agreement after an opinion poll showed Fianna Fáil trailing Fine Gael by 13 points at the weekend.

“I met all my TDs, the bulk of them in the last two months. No one has articulated, bar yesterday, the need for a special ardfheis. Let’s keep as calm as we can here...Let’s not run away with ourselves.”

On the upcoming presidential election, Mr Martin said Fianna Fáil would support President Higgins, but the idea of committing any resources to his campaign had “never been on the table”.

He said Fianna Fáil councillors would be allowed to nominate other candidates to stand against Mr Higgins as he did not “want to trample on the constitutional prerogative of councillors” to assist people in getting on the ticket.

On Brexit, Mr Martin said the UK Conservative Party was “beyond satire and has long ceased to be amusing”.

It showed a cavalier disregard for one of the greatest achievements of modern democracies, the peace and reconciliation agenda in Northern Ireland

“It has put to rest any lingering sense of the seriousness of the self-regarding and childishly-erudite class of public figure which emerges from many of their most prominent schools.”

He criticised Brexiteers, including MP Jacob Rees Mogg, who this week said the benefits of Brexit might not be felt for 50 years.

“That kind of sums it up, doesn’t it. There are no benefits. There’s a mistaken view that you leave a market of 500 million and you suddenly discover other markets out there that are more lucrative.”

Mr Martin told the summer school that the decision by then UK prime minster David Cameron to hold a referendum on Brexit was “one of the most disastrous failures of leadership in a modern democracy”.

“It is not just that the people were presented with a dishonest and incomplete question – it showed a cavalier disregard for one of the greatest achievements of modern democracies, the peace and reconciliation agenda in Northern Ireland.”