How to stop a child ‘falling in with the wrong crowd’

Kids are influenced by peers and groups, but they can learn to say No 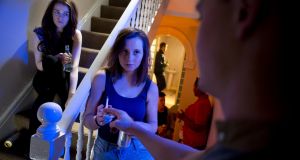 What will she say? A teenager being offered pot and alcohol at a house party

As children grow older, a big worry for parents is that their children might “fall in with the wrong crowd” or be part of a negative or irresponsible peer group.

You might have a child who is already “easily led” or who has a tendency to be “impulsive” and you know that with the influence of the wrong peers they could easily engage in risky, damaging or even delinquent behaviour.

Or you might have a child who is vulnerable and who struggles to make friends which could mean they get taken advantage of by peers or compromise their own standards of behaviour in order to “fit in” a certain group.

Developmentally, it is of course normal and expected that children will become more influenced by peers and groups outside the home. This is part of their journey to independence as they work out their own identity and how they want to live their lives. The challenge as parent to do what you can to ensure they are in the company of responsible and supportive friends as they make this journey.

Influencing your teen to be part of good peer groups

As a parent you are always striking a delicate balance between encouraging children to make their own decisions and making some decisions for them. I think the best influence you can have on your children is by establishing a positive environment in which they grow up. You should not choose your child’s friends but you can influence somewhat where they select them from.

You can encourage your child to belong to well-established and supervised peer groups such as sports teams, drama groups or the scouts where they are most likely to make great friendships The key is to help your child find peer groups that match their passions talents and interests – this is where they will make the most fruitful friendships.  Sometimes, extended family peer groups can be helpful too.

One teenager I worked with on the margins was helped when his parents arranged for him to join a scouts group with one of his cousins he got on well with. Going with his cousin made the difference and ensured he attended.

Encourage them to think about peer influences

If you are concerned that your child is in an unhelpful peer group or friendship, be careful about being judgmental or over-criticising the other children. In the heat of teenage rebellion, this can backfire and strengthen their alliance to this friend or group. Instead, take time to encourage them to think through peer influences and what good friendships are.

Gently ask questions such as: “What is the best type of friend you can have? Or would a real friend put you under pressure to drink like that? Or what can you do if someone treats you badly like that?”  Encourage them to think through peer pressure and to make their own decisions.

Teach your children how to say No

Internationally, there are many different youth programmes that are focused on preventing teenagers smoking, drinking and using drugs. The programmes with the best outcomes teach social skills on managing peer groups and in particular “drug refusal” skills ( basically how to say no to peers when offered alcohol, cigarettes or drugs). As a parent, you can use this research to your advantage by taking time to equip your child with skills to manage peer groups.

For example, in conversation, your teenager might agree that they don’t want to smoke, but you can go further and help them manage peer pressure by exploring with them – “what would you say to someone who offered you a cigarette at a party?”

Or before you agree to your teenager going to a party where some of the teenagers might be drinking, you might explore – “how will you ensure you don’t drink? What will you do/ say if someone offers you a drink?”

The key is to help your teenager think through and rehearse these challenging social situations. The research suggests that preparing good assertive answers in advance makes it more likely that teenagers will put these into practice when the situations arise. Equally, having these safety conversations in advance children allows you as a parent to talk through all the issues and to influence them positively.

Take a moment to consider what friendships and peer groups each of your children belong to:

- What peer groups and friendships are positive influences in their live?

- What potential peer groups and friendships can you encourage?

- What challenging peer social situations are they currently facing (or due to face in the near future)?

- Think how you can prepare them to face these social challenges? Help them rehearse how they might deal with them.

Dr John Sharry is a social worker and psychotherapist and co-developer of the Parents Plus Programmes. He will be delivering a course on ‘Helping Children Overcome Anxiety’ starting on Monday, February 6th. See solutiontalk.ie.