Responsibility vs freedom: Teens who drink at home are more likely to binge 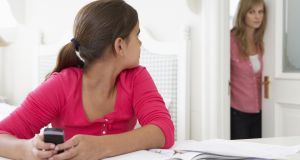 In recent times we have read about the problems of being a “helicopter parent” who “hovers” over children becoming over-involved, deciding too much for children and not giving them the freedom to learn from their own mistakes.

However, equally problematic is “over-permissive” or “disengaged” parenting, when anything goes and children are given too much freedom for them to handle, or when parents are disconnected from their children in a way that leaves them vulnerable and unprotected.

The key to good parenting is to strike a balance between empowering children to decide for themselves and setting rules to guide and protect them.

In my clinical experience, generally parents set too few rather than too many rules with their children. Good parents can be persuaded by their children to be “over permissive” rather than “over controlling” and this can lead to problems.

Recently, I worked with a family, where the 12-year-old boy had access to his tablet overnight with his own private password (meaning his parents could not monitor his online activity). As a result, he was accessing violent and pornographic sites which were having a detrimental impact on him. Clearly, he needed definite rules about his tablet use, including a ban on late-night use and the agreement that his parents would know his password to monitor his use. However, his parents had drifted into a situation of not setting appropriate rules around technology and it took some time to re-establish them.

In addition, many parents might let their young teenage children drink alcohol at home with their friends out of a belief that this is safer than them drinking in unsupervised settings. The problem is that there is no evidence for this more permissive stance and in fact the evidence is to the contrary. Young teenagers who drink at home – albeit supervised by their parents – are much more likely to binge drink outside the home in unsupervised ways than peers whose parents adopt a more conservative stance.

While there is room for negotiation, children need clear, positive and generally conservative rules around safety to guide them.

As teenagers get older, of course they need to take more responsibility for themselves and so fewer “parent rules” are appropriate. However, even in those situations parents have a crucial role in advising and guiding teenagers. Teenagers are very influenced by their parents’ values and preferences once these are communicated to them.

Parenting is a bit like going on a long plane journey with your children. When they are younger, you are exclusively the “pilot” making all the decisions in their lives. As they get older, you want them to become your “co-pilot” as you show them how to use the “controls” as you share the responsibility of making decisions in their lives. When they are adults, you want them to have taken over as the “pilot” so they can become fully in charge of flying their own plane.

A key principle in teaching children how to be safe is to gradually increase their responsibility. Don’t immediately hand over all the control to them and instead increase this step by step. For example, you might start by only letting them go out to supervised parties, then you might just bring and collect them, and then you might let them go by themselves once they come back at an agreed time.

You take time to prepare them for each step and only let them take the next step once they have shown they can be responsible.

It is important that you take time to prepare children for each step of increased responsibility. Before you allow your children access to a new technology it is a good idea to take time to discuss rules and  safety issues (eg what would you do if someone you don’t know online asks you for personal information?).

It is your own actions, habits and lifestyle that will have the biggest influence on your children

Or before letting your teenager go to party, you agree the rule of not drinking and smoking and then explore the how they can keep themselves safe (eg what would they do if someone offered them a cigarette?).

As a parent, it is very important that you supervise the rules that are established and that you hold children to account for them. If a child cannot keep a rule or do what is expected of them with a new responsibility, then you need to follow up with them. Usually taking a temporary step back on the road to responsibility is the best consequence.

For example, if they can’t take the responsibility of limiting their screen time themselves, then you set a timer or have an automatic switch off. Or if a teenager comes home drunk from a party, then you reduce their freedom going out until they can prove to you that they can be responsible.

When setbacks happen the most important thing is to talk through the issues with your children so as to help them learn from their mistakes. For example, you might explore asking them questions such as: What happened and how this affected other people? What they have learnt and what will they do next time? What they think the consequences should be?

In the end, children will learn more from what you do than what you say as a parent. It is your own actions, habits and lifestyle that will have the biggest influence on them. If you model responsible safe behaviour then this is the example they are most likely to follow

Take a moment to consider how responsible each of your children are and what rules around safety you might need to set in your home.

– How can you communicate these rules positively to your children?

– How can you supervise these rules?

– What is the next step on each of your children’s road to responsibility?

– How can you prepare them to take this next step?

Dr John Sharry is a social worker and psychotherapist and co-developer of the Parents Plus Programmes.