In the past dismissed as ‘women’s problems’, painful gynaecological conditions such as endometriosis are finally being taken seriously 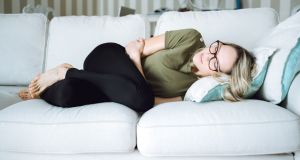 The topic of period pain and associated conditions, often filed under ‘women’s problems’, is being discussed more openly. Photograph: iStock

Sometimes it feels like taboos are being smashed on an almost daily basis, with movements such as #MeToo bringing about a huge cultural shift in how women are making their voices heard. Another area that appears to be emerging from the shadows of late is menstrual health, with the topic of period pain and associated conditions, often filed under ‘women’s problems’, being discussed more openly.

One of several books recently published on the subject is Ask Me About My Uterus: A Quest to Make Doctors Believe in Women’s Pain, by Abby Norman. She explores how women are conditioned to keep their pain private and writes: “Doctors today often refer to the diseases that exclusively befall women – ovarian cancer, endometriosis – as ‘silent’ and ‘unseen’. This is unsurprising; those who are doing the describing are frequently men . . . When you talk to the women who have had endometriosis, you will find that it isn’t that the disease is silent but that no one is listening.”

However, many people are now beginning to listen, especially as high-profile women, including actor Daisy Ridley and comedian Chelsea Handler, speak out about their own experiences with painful periods and endometriosis, a disorder where the womb lining grows outside the uterus, resulting in chronic pain and painful periods, fatigue, and sometimes infertility.

There was a huge response to a piece in Vogue by writer and actor Lena Dunham, in which she gave a powerful account of having a hysterectomy because so could no longer cope with the pain of endometrial disease. Though the pain started when she was a teenager, Dunham (31) wasn’t diagnosed until she was 25.

Similarly to Dunham, Dublin woman Michali Hyams began experiencing severe period pain when she was a teenager. After countless visits to doctors and specialists, she was eventually diagnosed with endometriosis in 2015.

“I was almost 30 years old when I got my diagnosis – I started my periods when I was 12,” she says. “For so many years, I was told either I was imagining it or I had a very low pain threshold.”

Hyams was diagnosed when, plagued with bladder problems as well as intense pain, she was referred to Dr Aoife O’Neill, a specialist in endometriosis at the Coombe and Tallaght hospitals in Dublin. A laparoscopy showed Hyams’ womb and ovaries were stuck to her peritoneum (the membrane covering the abdominal organs).

“It meant that every month when I started to cramp, they would literally be pulling each other apart,” says Hyams. “While being told your internal organs are stuck together wasn’t exactly reassuring, knowing the pain was real did make me feel like I wasn’t crazy.”

Hyams received several misdiagnoses and during a period living in the US in her early 20s, was hugely upset when she was informed by a male doctor that she was experiencing early onset menopause. However, when she went back with her father, she says the doctor’s tone altered considerably.

“I went home, bawling crying, and my dad said he would come in with me the next time. The doctor’s attitude completely changed when my father was in the room.”

This type of experience is backed up by Maya Dusenbery, in her book The Truth About How Bad Medicine and Lazy Science Leave Women Dismissed, Misdiagnosed, and Sick. In a recent interview on US radio, she said she found in her research that female patients often take a male relative or spouse with them to doctors’ appointments.

“I found it disturbing . . . how many women reported that as they were fighting to get their symptoms taken seriously, [they] just sort of sensed that what they really needed was somebody to testify to their symptoms, to testify to their sanity, and felt that bringing a partner or a father or even a son would be helpful. And then [they] found that . . . they were treated differently when there was that man in the room who was corroborating their reports.”

Recently, Hyams decided to share her story on Twitter and was taken aback by the number of women who responded with similar experiences. “A lot of my friends went to get checked because they were saying they would be spending two or three days a month in bed. That’s not normal. Your periods shouldn’t stop you from being able to live your life.”

Dr Aoife Mullally, a consultant gynaecologist at the Coombe, says while women often struggle to have their pain taken seriously, they also tend not to seek medical help until their situation becomes unbearable. She says their problems can then worsen as they may wait more than a year to see a specialist.

She believes women with gynaecological symptoms deserve to have their pain investigated and treated accordingly.

“There is no doubt women feel they have been fobbed off. A lot of it is because it’s a longstanding cultural thing – that if you have periods, you will have problems and you just have to put up with it. Certainly, I don’t think men would be left in chronic pain every month that affected their ability to go to work, or look after their kids. They wouldn’t be left for a year without somebody doing their damnedest to find out what was causing it.”

It would appear that some male experts agree. A 2016 interview with John Guillebaud, professor of reproductive health at University College London, recently resurfaced online, attracting much comment. His research showed menstrual cramps can be as “almost as bad as having a heart attack”. He added: “Men don’t get it and it hasn’t been given the centrality it should have. I do believe it’s something that should be taken care of, like anything else in medicine.”

Mullally is optimistic that the embarrassment and silence around menstruation and in turn, gynaecological health, is being slowly eroded, especially among a more open, younger generation.

“Women are talking more about reproductive health in general and I think that will spill over into gynaecological health. Although things are getting better, there has been such a culture of silence that it is going to take a long time before you’ll be able to mention your endometriosis in the office – whereas men will talk about their knee injuries from rugby and all that kind of stuff. If women are talking about symptoms more, I think they will attend to their own health quicker than they would otherwise.”