Bald truth: There is help for hair loss

‘It’s really important that you tackle hair loss quickly. A lot of the time, men panic’ 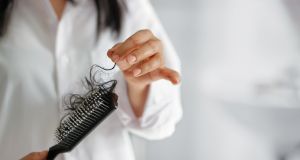 As anyone who’s ever tried to clear the clogged bath or shower drain knows, we all lose our hair. Hair shedding is a part of everyday life and is totally normal.

On average, we all lose around 80 strands a day, but if you’re losing significantly more than that, or you notice they aren’t growing back, well, that’s when things start to get a bit worrying.

Consultant dermatologist Caitríona Ryan says most men, by the time they are 50, will have experienced some form of male pattern baldness or androgenic alopecia – hair loss that primarily affects the top and front of the scalp. “I think there’s this idea that men are not so bothered about their hair compared to women, but that’s just not true. It’s a significant issue for men and is very psychologically damaging for some of them and very distressing.

“It’s really important that you tackle hair loss quickly. A lot of the time, men panic and sit it out but if we get in early enough while the hair follicle is still intact, then yes, it is possible to regrow the hair – or to improve the health of the existing thinner hairs.”

As a first port of call, Ryan suggests Minoxidil, also known as Rogaine, which can be bought over the counter in pharmacies. She says it works on the scalp to reactivate shrunken hair follicles and is “very effective if your hair follicles are still active”.

Another possible option is the drug Finasteride, commonly branded as Propecia, a prescription tablet taken once a day. It stops the body from converting testosterone into dihydrotestosterone (DHT). While exact causes of male pattern baldness are still being studied, lowering DHT levels has been proven to help. “A third of patients maintain the hair that they have on this drug, but being proactive is key,” Ryan stresses.

If you are losing patches of hair in an apparently random manner you may have alopecia areata and, in extreme cases, this may affect all of the hair on your body. Alopecia is thought to have hereditary and autoimmune factors (where the body mistakenly attacks itself).

Consultant dermatologist Rosemary Coleman says at least one in three women will suffer from hair loss or reduced hair volume at some point, but that people with alopecia areata need expert medical help. “It is particularly distressing to lose all your hair and it’s hard to even imagine it happening. It is a huge psychological burden on patients who just want to find the answer.”

Eilish Bairéad’s hair-loss started when she was 13-years-old. “I was in secondary school and it was only ever small patches that started to fill in after a while and I learned to cope and it always went away.”

However, three years ago it started again but this time it spread – she lost all her body hair and describes feeling like “an alien”. “It was mad, people ask me if it was stress but I was in a great place – new job, new boyfriend (who she is marrying at the end of this year) and I was very happy.”

“Who knew eyelashes were so useful?” she says. On the upside, she had super-soft skin but it was a very depressing time for her. “I tried everything and that’s one of the big things to understand. It’s not one approach for everyone. You have to find out what works for you.”

The 33-year-old is currently being treated with a JAK inhibitor , a drug normally used for bone marrow conditions which can reverse the baldness caused by alopecia.

“It is the worst place to be, but I was so lucky that I had a really great beautician who helped me with microblading [a make-up procedure] for my eyebrows so that at least I looked more normal. It’s really hard to describe looking in the mirror when you don’t have one bit of hair on your head or body but my dermatologist Caitríona kept me going’.

Bairéad acknowledges that she may have to come off the treatment if she wants to get pregnant in the future, but, for now, she has a full head of hair.

In March, she went to a wedding with her boyfriend without a wig. “There’s just no awareness of the condition in Ireland, it’s very lonely and isolating, but I think there are more new drugs and treatments coming on to the market now, making it easier to find options you can use to get your hair back.”

Coleman believes these newer approaches have some merit but she cautions against “spending thousands of euros on shampoos and ‘fixes’ without expert advice”.

“We see people who have been suffering for a very long time and increasingly there are treatments which can help people deal with devastating hair loss. Coleman has had success with platelet-rich plasma (PRP) injections, which initially were described in the press as “vampire facials”, a skin treatment that uses your own blood to help get a youthful complexion. PRP is “a great treatment option for hair loss because it has a number of scientifically-based articles showing its efficacy in increasing hair count, hair thickness, and the growth phase of the hair cycle,” says Coleman who explains that the plasma contains growth factors which help stimulate the activity of the hair follicles and promote new hair growth.

It is not the answer for everyone, she says.

“Investigating the cause of hair loss is a process, it can be extremely depressing for people – for both men and women – their hair can be their crowning glory, so we are always looking at how we can help this person regain their hair while being realistic about what we can change.”

This Connemara coastal home will blow you away
6

‘At night I would go to my room to quietly drink.’ Irish women and addiction
9