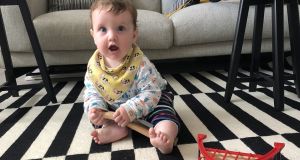 Louis with pieces of his brother’s favourite train set.

The era of the daft driverless car has arrived and not one of those high-tech futuristic vehicles. This one is seven months old, wears a nappy and is called Louis.

However, there are a few glitches in this model. So while he has learned to move and climb he always manoeuvres towards danger rather than avoiding it. On his latest journey, Louis discovered he could leverage himself to standing position using the dining table chair . . . which subsequently started to topple.

You see, I thought my house had been road-tested (baby-proofed) for the daft driverless car era, but Louis is revealing flaws all around. There’s the gap underneath the couch that’s wide enough for a baby’s head to fit under, but not to get back out. There’s the house plant on my floor with delicious looking leaves and then there’s the side tables in my sitting room which topple over with a tiny tug from below.

All this fun and he is not yet up to full crawling speed. Louis is mainly creeping from the safe area surrounded by baby toys to whatever the most hazardous object is within view.

At times, he looks like a car revving its engine as he lies in crawling position with tummy up high rocking back and forth. Then it’s one or two steps forward before he finally plants his face into the ground. This is followed by some very dramatic wailing and sobbing.

I can only guess this phase was invented by mother nature to stop the onset of parental smugness. The smugness began at about six months because Louis had suddenly got easier. He had learned to sit up and would happily play with his toys while I would get to do something with two free hands or even finish a cappuccino before the milk turned sour. My smug smile has been replaced with the serious look of a traffic Garda at rush hour.

The ultimate destination for our daft driverless car is his big brother’s favourite train set, with its colourful bridges, little stations and delicate level crossings. It’s a toy so precious to first born he still calls it “my new train set”, although it’s many months old. I swear the baby dribbles an extra little bit when he spots it. So, “clever Mammy” set up a cheaper simple old train set right beside the “new” one with dreams of the boys playing happily side by side.

Clever Mammy should have known. Louis may some day be in the fraud squad, for he can detect a counterfeit in an instant, like giving him a toy mobile phone to lick instead of my iPhone. So the simple track was dribbled on and discarded as he moved, like a destructive Godzilla, towards the “new” train set.

Clever Mammy came up with a Louis-proof plan B to stop the daft driverless car from crashing and to give big brother time to play with his non-babyproof toys. As I proudly pulled a ball pond from the back of the storage cupboard I fondly recalled reading a book as my first boy happily played in it.

An hour later, I was on my hands and knees picking plastic balls from every corner of my kitchen while my pre-schooler lay on his back in the pond and the baby squealed beside him. Big brother had rediscovered his love of the ball pond and had thrown in some hidden hard toys, turning it into a game of bump yourself roulette for the baby. The pond was swiftly shoved in the back of the cupboard, but the little plastic balls still reveal themselves daily in crevices in my kitchen.

However, there is one advantage to having a big brother with ‘dangerous’ toys – motivation to crawl.

If you place enough Lego just out of reach, Louis tries to crawl more. “C’mon Louis” big brother and I shout as if Louis is in a mouse maze at a quaint village fair being baited with cheese.