Traces of men's urine in bowls of pub peanuts? Might not be as bad as it sounds

Prolific fathers, the undesirables, the unemployed – sometimes we just need to shift our perspective to see things in a whole new way 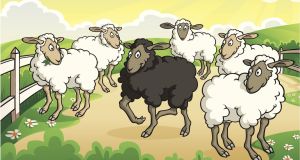 The man who goes around fathering children without a care for the future is, perhaps, a guarantor of the health of the human species as he varies our genetic material. Photograph: iStock

If you spend a lot of time in men’s toilets, you might wonder at the number of us who walk out without washing our hands. You might even wish a hand would reach down from heaven, drag these guys over to the washbasin and order them to acquaint themselves with soap and water.

But might they actually be unlikely heroes? This thought occurred to me when I was listening to Nadia Dalbuono’s crime novel, The Few, in which the main character decides against indulging in peanuts at a bar because he has heard they contain traces of the urine of nine men.

If this is true – and the internet wasn’t helpful in establishing whether it is or not – we could be talking about a variety of pathogens passing into the population via free bar snacks. This is in turn could help us to build up resistance to a range of infections.The process is fairly benign. You don’t hear of people dying from eating free bar food so any infections that might occur must be mild. Yet, this could help us to resist more serious, similar infections later on.

Is this crazy? Maybe, but maybe not. Sometimes we just need to shift our perspective to see things in a whole new way.

Consider men who father children by many women and the women who play a vital role in all this. In tabloid mythology, all of these people are having a whale of a time on foot of taxes paid by respectable people – ie people like us.

Yet, we know that varying the gene pool is vital to human survival. If people reproduce within the family, the chances of passing on genetic problems increase. So we strongly discourage people from marrying their brothers or sisters or their first cousins.

The man who goes around fathering children without a care for the future is, perhaps, a guarantor of the health of the human species as he varies our genetic material. He is the Johnny Appleseed of evolution.

Another example of how upending our view helps us to see things differently: whenever I walk through St James’s Hospital in Dublin, one of the finest hospitals in the world, I am reminded that its origins lie in disapproval, some centuries ago, of the “undesirable objects” who used to hang around what is now James’s Street.

This led to the establishment of a series of institutions which eventually included a workhouse. These institutions were based on the erroneous idea that what’s wrong with the poor is that they don’t work hard enough. Structural causes of poverty formed no part of this self-righteous tut-tutting.

People who have no interest in working constitute another group about whom we may have to change our minds. This, I believe, is a smaller group than the fevered imaginations of their critics suggest and constitute a tiny minority of the unemployed.

Still, these people exist, and appear to have worked things out in ways satisfactory to themselves. Consider the coming robotics revolution. As jobs disappear and more of us are left sitting around like inconvenient relics of the Industrial Revolution, people who don’t wish to work may be seen as the good citizens of the new economy. Living on very little and not expecting anyone to go to the trouble of creating jobs for them, they will leave the robots in peace to go on making money for their owners. But how will redundant humans pass the time? For that we will have to turn to advice from our friends who don’t want to work. They will become our new gurus. We will sit at their feet to learn how to be at peace with ourselves in this new world.

And if we grow hungry as we listen to their wisdom, we can ask our genetically diverse kids to pass around the peanuts.

– Padraig O’Morain is accredited by the Irish Association for Counselling and Psychotherapy. His latest book is Kindfulness. His daily mindfulness reminder is free by email, pomorain@yahoo.com