As parents, we need to teach our teenagers about social media safety 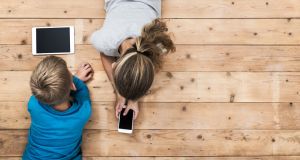 “My fear of social media intensified as my eldest, and guinea pig, entered secondary school and her smartphone became an extension of her arm.” Photograph: iStock

“I’m so glad I grew up when I did and enjoyed living in the real world,” said my hubby in reference to the two bowed heads sitting beside him scrolling through their social media pages. One belonged to our daughter and the other to me. “Well I’m working,” I replied, knowing quite well I was getting side eye at the suggestion.

I never bothered much with social media before it became a necessary part of my work. I lived in fear of it if truth be told. Having attended numerous “keep your child safe online” meetings in my childrens’ schools and heard the horror stories and underhand tactics of would-be predators, I regarded it as a terrifying place full of perverts and reprobates. So avoidance at all costs seemed the best tactic.

Without a personal inclination and with a strong desire to keep younger children safe, it’s easy enough to avoid it by choice but as pre-teenagers and teenagers come on the scene, attempted social media resistance becomes a different prospect altogether.

My fear of social media intensified as my eldest, and guinea pig, entered secondary school and her smartphone became an extension of her arm. As she pleaded to use the different platforms I broke out in a cold sweat fearing the danger my agreement might place her in.

“But everybody’s on it” became her argument of choice as I replied with the “well if everyone put their finger in the fire would you do it too” argument I had heard so much from my own mother in my youth. It seems the claim may be true – eventually we turn into our parents!

Of course, every older generation thinks they know better and every newer one swears not to repeat the sins of the father. I had great ideas about the sort of parent I would be and the ideals I would uphold – and then I actually had kids and realised that they come with personality and context, and the challenges we ourselves faced can never be identical in ever-changing times.

“A little learning is a dangerous thing,” Alexander Pope claimed – well it also fuels “ the fear” . I recently caught the end of a television interview with a woman who had two small children, the eldest of whom was six. She claimed that she would not be allowing her children access to smartphones or social media until they were at least 16. I found myself rolling my eyes at the suggestion, while thinking “good luck with that one” – not because I didn’t appreciate her ideal but because I’ve learned through parenting teenagers myself that, love it or loathe it, this is how teenagers communicate. To deny them access means ultimately cutting them off from their peers and that can bring a whole different set of challenges.

That and the fact that we were all teenagers ourselves once – and a determined teenager will find a way, possibly away from the safety of home.

When I relented that first time round, the rules surrounding it were strict and restrictive. Each new platform that appeared brought more parental terror and further lectures about only adding friends that she knew in real life. But the real challenge comes as teenagers get older and a balance must be struck between respecting their right to privacy and keeping them safe online. It’s not easy when as a parent all you want to do is protect your babies – no matter how much taller than you they are!

Because when it comes to parenthood, our ultimate duty is to prepare them to face the big bad world without us, and just like I argue the case for doing chores with my housework-resistant offspring, a light switch won’t just turn on when they reach 18. The online world makes up a significant portion of the big bad world these days, bringing all its advantages and disadvantages. Teaching our teenagers responsible usage with all that entails makes much more sense than trying to impose a blanket ban. But you can only teach when you understand the potential pitfalls and perils yourself.

I reminded himself of this, while completely agreeing with him about the superior importance of real-life friends.

“It’s here to stay though, you know, and there’s a whole lot more of them who’ll want to be on it in due course. How can you try to keep them safe if you don’t know how it works?”

“So Snapchat, I’ve decided to join,” I said turning to my visibly horrified daughter.

Sometimes it’s a challenge being a cool parent . . .

7 Michael Harding: ‘Thank you for your love,’ I wrote to a friend. Then I tore it up