‘I’m not blind. I’m Bobbie Hickey. Pleased to meet you’

Bobbie Hickey: My parents helped me forget about my sight difficulties 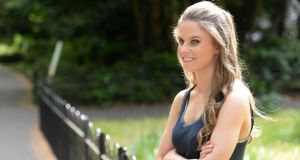 Bobbie Hickey: ‘My childhood was one out of a fairytale book.’ Photograph: Dara Mac Dónaill

Hello friends. I hope you all had a wonderful summer, I know I had. I spent my time riding horses, hiking with friends and learning every line of the Ratlin’ Bog off by heart.

Whether your child has a disability or not, there is no right or wrong way. You know your child best and, therefore, you know what they need, just like my parents knew that it was a good idea to normalise hospitals and surgeries for me as they were never going to go away. The only parenting tool that you all have in common is love.

My parents, Jennifer and Patrick, were not yet married and were certainly not expecting a baby. After any child is born, the parents’ lives totally change, more so when the baby was not planned and even more so when the unplanned baby is blind. Life as they knew it had just ended for my parents.

My childhood was one out of a fairytale book. My first memory is of my grandparents giving me a Tweenies scooter for my third birthday. I have another glimpse of a large inflatable dinosaur toy and another of a lifesize Winnie the Pooh teddy.

I can remember moving house when I was really young to a new estate. It was around this time that I started school – I was so excited. We had not moved in long when I met one of my oldest friends, Victoria. Slowly but surely a solid core group of girls in the estate began to form, with four other girls joining Victoria and me. What was once a quiet estate was now filled with kids having bike races and bake sales during the day and mammoth games of Tip the Can at night.

As the nights got colder and darker, the competitive spirit was brought inside with rounds of Just Dance and Mario Cart on the Wii, followed by religiously watching the X Factor every Saturday night. This group of girls is no longer playing Just Dance, instead we choose to compete in Dicey’s, but that’s a whole other story.

Growing up, I felt the same, because I was the same. Family holidays, I now know, were designed around me. One of my favourites was a week in a house down the country over Easter. Every day we would do something different; hike, board games, horseride, but my favourite thing we did was make a Scooby sandwich. Scooby Doo, the cartoon, featured a dog who had a large appetite and would eat sandwiches with countless layers on them filled with God knows what.

So, my family made a sandwich with nine layers full of different salads and regular sandwich fillings. I don’t know if it tasted so good because it was genuinely a good sandwich or because we all laughed the entire time while making it.

Everything I have said is how I remember growing up, but that was not the full picture. I had no idea that my parents had nowhere to send me to school up until a few months before that September, or that during my first few years of school I was getting constant corneal transplants because my eyes kept rejecting the previous one.

I had no idea that when we were flying home three days into a two-week holiday that there was a chance I could lose my sight. Of course I have memories of hospitals and finding things difficult as a blind child, (such as karate, tap dancing and hockey) but my main memory growing up is of my parents getting me doing everything, so that I never said never, or gave up without a fight.

Platform Series: Bobbie Hickey
1) Making a sandwich when you're blind
2) Not getting the points I wanted
3) Benefits to being visually impaired
4) I’m not blind. I’m Bobbie Hickey
5) College with no friends, and no eyes
6) People freeze when I approach them
7) Why I mind needing help
8) The best teacher I have ever had
9) ‘This could happen to anyone’

Terenure terraced home for €475k is ready to go
7