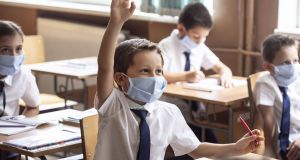 Covid-19 and schools: none of the three vaccines authorised by the European Medicines Agency is licensed for use in children, and probably won’t be until at least the end of this year. Photograph: E+/iStock/Getty

Scientists have warned that emerging data on long Covid in children should not be ignored given the lack of a vaccine for this age group, but cautioned that the evidence describing these enduring symptoms in the young is so far uncertain.

Recently published British data has caused worry. It suggests that 13 per cent of under-11s and about 15 per cent of 12- to 16-year-olds reported at least one symptom five weeks after a confirmed Covid-19 infection. The figures were gathered by the UK Office for National Statistics, which samples households randomly, meaning positive cases do not depend on having had symptoms and being tested.

English schools are due to reopen next week. In Ireland, schools reopened on Monday for half of primary-school pupils and, at secondary schools, for sixth years for the first time since before Christmas. Prof Christina Pagel, a member of the UK’s Independent Sage committee and director of clinical operational research at University College London, suggested in a Twitter post that although emerging data on long Covid in children is uncertain, it should not be ignored, particularly as none of the three Covid-19 vaccines authorised so far by the UK regulator or the European Medicines Agency is licensed for use in children, and probably won’t be until at least the end of this year.

Although young people are relatively less likely than adults to become infected, transmit the virus and be hospitalised, the key question is whether even mild or asymptomatic infection can lead to long Covid in children, according to Danny Altmann, professor of immunology at Imperial College London. “The answer is that it certainly can, and the long Covid support groups contain a not insignificant number of children and teens,” he says.

Sammie Mcfarland, a 45-year-old fitness instructor, and her 14-year-old daughter, Kitty, have endured a plethora of symptoms, ranging from mild to debilitating, since getting infected last March. Their initial attempt in May to get help led to a nurse diagnosing Mcfarland as depressed, and her daughter mimicking her symptoms.

ONS samples households randomly - so positive cases do not depend on having had symptoms & being tested. pic.twitter.com/ZFM2zqaWB6

“I came away from that appointment feeling very broken, and very unheard and questioning my own sanity,” says Mcfarland. “And then I spent three days in bed being very tearful… and I woke up after the third day thinking that I can’t be the only one.”

While Covid-19 was initially understood to be a largely respiratory illness from which most people would recover within two or three weeks, as the pandemic wore on increasing numbers reported experiencing symptoms for months on end. These long haulers – with symptoms affecting organs ranging from the heart to the brain – have no standardised treatment plan.

Frances Simpson, a lecturer in psychology at Coventry University, in England, says she is very worried by the emerging data on long Covid in children. She points out the sizeable gap between acute infection and long Covid kicking off. Some children are initially asymptomatic or have mild symptoms, but then it might be six or seven weeks before they start experiencing long-Covid symptoms, which can range from standard postviral fatigue and headaches to neuropsychiatric symptoms such as seizures, or even skin lesions.

At the moment there is no consensus on the scale and impact of long Covid in adults, but emerging data is concerning. For children, the data is even more scarce.

Recent reports from hospitals in Sweden and Italy have generated concern, but this data is not from national trials – they are single-centre studies – and include relatively small patient numbers, says Terence Stephenson, a professor of child health at University College London. Stephenson was awarded about €1.6 million last month to lead a study investigating long Covid in 11- to 17-year-olds. “I don’t have a scientific view on what long Covid is in young people is – because frankly, we don’t know,” he says. Preliminary results are expected in three months.

As for the results of the UK Office for National Statistics survey, critics say that, given there is no comparator group – and some symptoms, such as fever and cough, are common in childhood – the data is not entirely reliable.

“I don’t know that that is a very accurate way of gathering data… I don’t think that’s likely to be truly reflective of how many young people are really experiencing persistent symptoms,” says Dr Liz Whittaker, senior clinical lecturer in paediatric infectious diseases and immunology at Imperial College London.

“I’m talking to paediatricians who are already getting referrals – the numbers aren’t huge… I don’t think there’s a huge cause for concern,” she says, adding that what parents are most frustrated by is that nobody knows much about it because it’s a new condition.

“The good news is that the majority of young people who get chronic fatigue tend to get better with appropriate support.” – Guardian