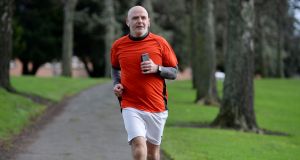 Running for victory – when a Park Run isn’t even a race. Photograph: Alan Betson

It wasn’t long after dawn on the coldest day of the year when I found myself walking over frosty grass towards a large group of better prepared people gathered in a huddle in Dublin’s Fairview Park.

I approached someone official looking, a woman in a high-vis jacket, and explained that I was there for my first parkrun. She was super encouraging and told me to wait in the huddle.

Minutes later, another equally upbeat volunteer made her presence known and told us the run was about to start. She called on the newbies to raise their hands and I put mine up as did a handful of others and she stressed that we were not racing and times were not important.

“Not to you, maybe,” I thought to myself as I slyly moved towards the top of the pack to ensure I was better placed when the starter’s gun – more of a starter’s shout, really – went off.

Earlier that week I’d run a lonely 8.5km around the Phoenix Park and while I was delighted with the distance I was disappointed with my 6-minute per km pace so decided to push myself harder by joining a group run and covering a distance of 5km much faster.

First I registered on the parkrun site and printed out a barcode – a pre-requisite for getting details of my performance.

My plan was to run to the run, then run the run and then run home from the run, but luckily I remembered I was not actually Forrest Gump before I set off so I hopped in the car and drove there instead. It was a wise move as by the end I was in no fit state for any more running.

When the not-a-race race started, I set off with the leading pack only delighted with myself. It quickly became clear I’d made a terrible mistake. These people were sprinting and a gap between me and them quickly opened and grew wider with each passing second.

With just one of the three laps of Fairview Park completed I was almost in a state of collapse and over the course of the following lap I was passed by people younger than me, people older than me, a woman pushing a baby in a buggy, an eight-year-old and a man taking his dog for a walk, an old dog who looked like he was about ready to be sent down the country to “the farm”.

As I finished that second lap, I saw the group I’d set off with. They were within touching distance of me but only because they’d already finished their race and were languidly stretching before heading home.

I continued huffing and puffing my way around the course and then, with 500m to go, I met the only hill on the course for the third time. It was the first time I slowed to a walk. No sooner had I done that than a woman ran past and hit me hard on the back.

“Come on, nearly there,” she shouted and raced off.

Her encouragement actually worked and I started running again. Over the last 300m I even picked up pace and passed a couple of people.

I was emailed my finishing place and time later that day. The good news was that roughly half of the 160 or so runners finished behind me and I’d come fifth in my age group, although I suspect there weren’t many more than five people in my age group.

The email also told me I had run my not-a-race in just over 28 minutes.