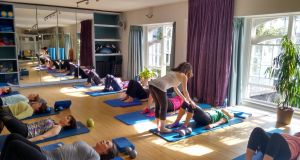 A pilates session at Live and Breathe Pilates in Dublin.

It was not instant love between Pilates and I. I didn’t like the look of it. It looked complicated. I didn’t relate to the celebrities who have reportedly gushed about how amazing it is – looking at you Meghan Markle, Madonna and David Beckham.

I’d categorised it as a fitness system more suited to athletes, dancers and elite-level exercisers, and not someone like me.

But I had promised to push myself out of my comfort zone and my mind was changed to give it a go after Pilates teacher Steph Grey got in touch with me.

Grey explained that, at her studio, Live and Breathe Pilates in Dublin, the exercise was a way to connect with how your body works and what it needs. She told me there were people of all ages and body types and with different fitness needs at her studio – including clients starting out on their fitness and wanting to tone up, professional footballers, rugby players, people with chronic pain and ill health, and those recovering from injuries.

“People think they need to feel better before moving more, but in fact it’s the other way around,” she said. “I believe this reconnection, slowing down and taking heed, is a key part of Pilates for everyone. It’s not about cranking out 20 reps of something at breakneck speed. It’s about being present in the moment, in your mind and body together, while moving.”

Grey, who did her first workshop in 1998 and trained as a teacher 15 years ago, had me convinced to at least try.

It was daunting going to the first class – I’d felt more confident about jumping from a 14m-high tree platform – but I convinced myself maybe I was more agile and graceful than I realised. A secret talent I’ve never discovered. I proved that notion wrong before I even got started in the class.

On the day of the first class it was cold, wet and windy. Eager to get away from the bad weather and get quickly into the studio building before I changed my mind, I leaned against the door to open it. Not a budge. I hadn’t waited for the buzzer – too eager. My second attempt I was adamant about getting in that door and after the buzzer went, I hurled myself, unnecessarily, full force against the door, which opened effortlessly once I had the patience to wait for the buzzer, and I barrelled through it, falling clumsily on to the ground. A woman inside, who I narrowly avoided knocking out, gasped at my dramatic entrance and looked too concerned for me (and probably herself) to make a joke of it. And so I hung my head in embarrassment, avoided eye contact and muttered “thank you” as she patted my shoulder as I shuffled up the stairs.

But it got better when I entered the bright and spacious studio. Once I got through warning Grey that instructors might have a significant challenge with my agility, I was ready to go. My first classes were one-to-one, and then I went to a mix of reformer, with the machines (which initially looked torture-like) that were weighted and helped improved my flexibility, and mat work.

I learned quite quickly things about my body that I hadn’t realised before, such as I have an obedient right leg and a “left leg that likes to wander”. I also learned my flexibility wasn’t as awful as I thought, and that my balance “ahem, needed work”, but they were all issues that could be worked on.

I wasn’t exhausted after the classes like I would be with high intensity workouts, but I did sometimes have a soreness in my muscles the next day – muscles I didn’t know had existed before these classes. I’d worked harder, I thought to myself, a bit smugly I might add.

As the weeks passed, I felt more energised after the workouts and I started to enjoy them instead of worrying about what I could or couldn’t do. My core wasn’t really a fan of the workouts; my abs burned and could no longer hide from hard work. “Don’t forget to breathe Rachel” was a line that had to be repeated to me continuously.

The exercises were small, slow controlled movements, and often much tougher to do than they looked. There were endless props and machines for support as I built strength. There was no time to compare myself to others, and when I did try to I awkwardly fell over, so that put an end to that inclination.

Pilates is a type of exercise that was alien to me but good for me to learn. It forced me to be present in the now and be more aware of how my body works – and to be kinder when it doesn’t react as I want. I’d ignored many small signals my body was sending me for too long – my deteriorating posture from sitting at a desk for most of the day or looking down at my phone, the niggles in my neck that had started to worsen and the general feeling of stiffness from lack of stretching. As Grey explained to me, our bodies adapt to the environment we put them in. “Pain is the body’s way of telling you something needs to change,” she said.

The instructors had an eagle eye for correcting small movements, and it had an impact in my daily life in how I moved. I realised I’d prejudged Pilates too harshly and learned a lesson that it is worth spending the time to try an exercise properly before deciding if it is for me or not.

Do I remember any of the names of the machines or exercises?

No, mostly not. But I have learned a lot about how my body moves and appreciating it more, and that’s what is important to me.

Restaurant meal kit review: A Spanish feast in the comfort of your own home
6