‘It’s hard to believe, but typhoid fever is on the rise’

Muiris Houston: The Pakistani XDR strain is proving resistant to most antibiotics 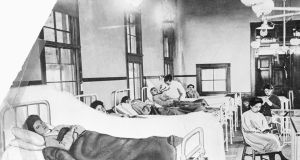 Mary Mallon (1870-1938), known as “Typhoid Mary”, was the first person identified as a carrier of typhoid bacilli in the United States. Contrary to popular belief, typhoid never really went away.

The more things change, the more things stay the same. It’s hard to believe, but typhoid fever is on the rise. It seems it’s the latest bug to develop extensive drug resistance. As a result, cases are being identified in Germany, Australia, Canada as well as across the developing world.

Typhoid is a bacterial disease caused by salmonella typhi. It causes fever, headache, abdominal pain and constipation or diarrhoea. Left untreated it kills up to one in five patients. S. Typhi spreads from person to person in water and food contaminated by faeces.

Our traditional image of typhoid is of a disease associated with inadequate sanitation and water systems. It’s potential to spread from person to person via food handlers was famously illustrated in the US by “Typhoid Mary”. Irish immigrant Mary Mallon became the most prominent typhoid carrier to be detained after infecting the families she cooked for. Mallon was quarantined between 1907 and 1910 and again between 1915 and her death in 1936 after breaching the terms of her initial release by continuing to work as a cook under an assumed name.

As we have seen with many other infectious illnesses, extensive international trade and travel is helping to spread antibiotic resistance in typhoid fever. In Europe, Australia and North America extensively drug-resistant variants (or XDR strains) are travel-related. Travellers have become infected while visiting Pakistan, where a large-scale outbreak of XDR typhoid is ongoing. The Pakistani XDR strain is proving resistant to all commonly available antibiotics except for azithromycin.

The return of typhoid is something of a shock to health systems in richer countries. Between the late 19th century and the 1950s, sanitary improvements, effective vaccines and antibiotics eliminated endemic typhoid from most high-income countries. But after a lifetime of relative security, the prospect of typhoid again causing death in western hospitals is no longer an outlandish idea, according to researchers at Oxford University.

Writing in The Conversation, Claas Kirchhelle and Samantha Vanderslott ask how did this happen? “The answer is uncomfortable and tied up in the inward-looking nature of Western disease eradication campaigns over the last century”, they say. “Contrary to popular conceptions of typhoid as a disease of the past, typhoid never really left... typhoid control often stopped at high-income borders, it became a neglected disease in other, poorer countries. This global neglect is now proving costly.”

By the end of the second World War, there was growing optimism about the prospect of eventual typhoid elimination. In popular imagination, the once feared disease had morphed into a negligible health threat.

During an age of widespread confidence in the imminent scientific defeat of infectious disease, there seemed little reason to fear its return. But according to the Oxford researchers, this confidence was misplaced as rich countries focused on protecting their own populations. “They prioritised vaccines, antibiotics and put surveillance-based biosecurity regimes in place, designed to stop typhoid from crossing back into high-income countries via travellers and migrants. This strategy was cheap in the short term but very costly in the long term.”

However all is not lost: there is now some optimism as a new generation of vaccines provide a foundation for new international efforts for typhoid control. New typhoid “Vi conjugate vaccines” (TCVs) include one that only requires a single dose, and is suitable for children of six months and older. But renewed efforts at improving sanitation and ensuring safe water supplies will also be needed.

I will leave the last word to the Oxford authors: “Like any disease, typhoid is a complex phenomenon, driven by a bacteria but also the peculiarities of societal structures. Passing from one human to another over millennia, S. typhi has not only perfectly adapted to our living habits and environments but also bears the imprint of our antimicrobial interventions in its genetic code. Controlling it will require both biological and social interventions.”

How to have a happy Halloween, Christmas and St Valentine’s this winter
3

Jennifer Rock, The Skin Nerd: ‘I was motivated by people’s perceptions of me as a teenage mother’
7

Is this the ‘best ever Paul Henry landscape’?
8

Seán Moncrieff: I’ve fallen out of love with America
9