Is there definitely a connection between sunbeds and cancer?

Doctors say yes. The sunbed lobby says not necessarily. So who do you believe? 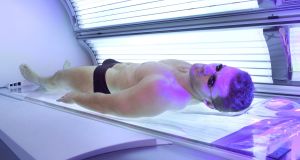 The Sunbed Association, a body representing sunbed salons in the UK and Ireland, took issue with the connection made between sunbeds and cancer, and challenged Minister for Finance Paschal Donohoe to produce evidence of it. File photograph: Getty Images

You almost have to admire the ballsiness of the Sunbed Association. They came out swinging this week after a Budget Day announcement of a VAT increase on sunbed services, from 13.5 to 23 per cent. The increase was explained as a recognition of “the clear evidence of a link between sunbeds and skin cancer”.

Instead, it took issue with the connection made between sunbeds and cancer, and challenged Minister for Finance Paschal Donohoe to produce scientific evidence of it.

So what is that evidence?

The largest study of the subject is by the International Agency for Research on Cancer (IARC), which classified UV-emitting tanning devices as “carcinogenic to humans (Group 1)”. This places it in the same group as tobacco smoke and plutonium. In 2009, the agency’s analysis of more than 20 epidemiological studies showed the risk of cutaneous melanoma increases by 75 per cent when the use of tanning devices starts before age 30.

The study says there is also sufficient evidence of an increased risk of ocular melanoma associated with the use of tanning devices. It confirms ultraviolet radiation is carcinogenic to humans.

The World Health Organisation advises avoidance of “sunlamps and tanning parlours and to protect yourself from overexposure to the sun”.

The WHO is measured in its advice. It says sunbed radiation can produce adverse health effects similar to those of natural sunlight, notably in fair-skinned, persistent users.

But the WHO also says that, due to the long latency for skin cancer and eye damage, it is difficult to demonstrate any long-term health effects. “Few studies have been undertaken to systematically assess the dangers of sunbed use, and the picture remains equivocal,” and “as yet, evidence for an association between sunbed use and increased melanoma risk is suggestive but not conclusive”.

There is no safe way to tan, says Daly – whether in the sun, under a sunbed, or by using illegal, dangerous Melanotan injections, known as the “Barbie drug”. Sligo University Hospital has done a lot of research into the effects of sunbed use, particularly among teenagers.

Daly says the use of sunbeds is higher among lower socio-economic groups, and recommends stronger education about the risks. She is particularly worried about the increasing home rental of sunbeds, which is “super cheap”, allowing friends and neighbours to visit for long, unregulated periods under UV lamps, without reference to skin type.

Though extensive research finds sunbed use increases the risk of skin cancer, the Sunbed Association is not convinced.

The sunbeds used in the IARC study were phototherapy units, not professional salon sunbeds, says the industry body. It claims WHO’s data shows dermatology phototherapy units increase risk by 96 per cent, while salon units have no statistically significant increase in risk.

The Sunbed Association says the data didn’t exclude people with skin type 1, who cannot tan. It insists the study authors accepted their findings were flawed and published a correction (the correction actually relates to a different study). It does a good job of defending its members’ interests.

The Sunbed Association’s main issue seems to be that much of the research is on sunbed use in general, and does not pertain to how its member salons operate. It appears to pick out the bits of the IARC research it feels don’t apply to its salons.

“They would say that , wouldn’t they? Anything else would be like turkeys voting for Christmas,” retorts Rosemary Coleman, consultant dermatologist at Blackrock Clinic. “It amazes me that sunbeds have not been totally banned in Ireland, as has occurred in other countries, by now. There is abundant evidence from studies worldwide confirming their association with skin cancer. It’s indisputable.”

“There is no ‘responsible’ level of sunbed use. People who have ever used a sunbed have a higher risk of melanoma.”

It’s all Coco Chanel’s fault, apparently. A pale face once signalled a desirable life of leisure without manual outdoor labour, but Chanel caught too much sun on the Mediterranean in the 1920s and started a fashion for bronze.

But she never reckoned on having to contend with Paschal Donohoe. Unusually, the tax rise shows up in budget figures as a zero exchequer income, so it’s a so-called “sin tax” whose purpose is not to raise money but to change behaviour. It might work, but a new Coco Chanel would probably do a better job.