‘I decided to get tested, not thinking there was anything wrong’ 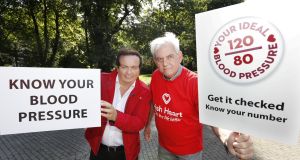 Bobby Mulvaney didn’t have the slightest inkling that anything was wrong with him but, because his mates from the local Men’s Shed were getting their blood pressure taken, he decided he might as well give it a go.

And the gentle coaxing of his friends may have helped to save his life.

“Men’s Sheds are great for organising things, and a couple of years ago someone had arranged for a blood pressure check van so people could get checked out,” he says. “I wouldn’t normally be bothered but it was just outside the door and all the lads were going so I decided to give it a go – not thinking there was anything wrong with me.

“Sure, I’d had headaches for a while but nothing that I couldn’t cope with. So I was surprised when the nurse said my blood pressure was high and I should get it checked out. Luckily, the lads knew about it, because if it wasn’t for them I probably wouldn’t have even followed it up with a visit to the GP.”

After some gentle reminders from his friends, the Kildare man decided to go for a check-up that saw him leave the doctor’s surgery with a prescription to lower his blood pressure and the presumption that this was the end of the issue.

However, a month later, he developed a severe pain in his leg and could hardly walk, so went back to the doctor where it was discovered that he had a condition which causes hardening of the arteries – and would require urgent medical intervention.

“I was stunned when the doctor said I had vertebral artery disease which was causing the headaches and the problems with walking,” says Mulvaney, who is in his 60s. “I was taken to hospital where I had five stents put into my left leg – something that I never expected. But the procedure helped a bit and I was able to walk better afterwards – but I do still get pains, and now they seem to be happening in my right leg.

“I am being monitored all the time and was told that the high blood pressure was an indication of what was wrong with me. I also have hereditary heart disease, and when I was younger I smoked, drank too much, didn’t do enough exercise, and my job as a courier meant I was sitting down a lot – the usual men’s stuff which all contributed to the problem.”

“High blood pressure is referred to as a silent killer as it’s often asymptomatic, but it increases the risk of stroke, heart attack, heart failure, atrial fibrillation, kidney failure and dementia,” she says.

“A normal blood pressure is below 140/90mm Hg, but it goes up with ageing and obesity, while some people have genetic predisposition, and some metabolic and endocrine conditions can also cause high BP – but can be treated.

“And in some people modification of lifestyle – cutting down on salt and alcohol, having more vegetables, fish and chicken with less processed food, more exercise and some weight loss – can lead to a reduction in BP. But many people need medication so it’s important to have a regular BP check to ensure it’s normal and remains normal over time.”

Dr Brown, a consultant cardiologist, says despite being more at risk, men are reluctant to take steps to look after their health.

“Too often we hear from male heart attack patients who ignore their symptoms, thinking their chest pains are indigestion or only seeking medical advice because their wife or partner insisted,” she says.

“By increasing awareness among men and those around them, we can drive faster recognition of symptoms, more calls to emergency services and ultimately see more men get to hospital for speedy treatment.”

Almost 10,000 people die from cardiovascular disease every year in Ireland – half of those from a heart attack. And heart disease and stroke remains the leading cause of death in men, who are nearly three times more likely than women to die prematurely from a heart condition.

But 80 per cent of this is preventable and, with a healthy diet, exercise, a total cessation of smoking and a minimal amount of alcohol consumption, most people could reduce their risks considerably.

Sarah Noone, dietitian with the IHF, says making simple changes to lifestyle can save lives.

“Your weight can make a real difference as, if you’re overweight or obese, you are more likely to develop heart disease than someone who is a healthy weight,” she says.

“There are two main ways to tell whether you need to lose weight: your body mass index (BMI) and your waist measurement. And your shape, as much as your weight, can affect your risk of heart disease, as carrying excess weight around your middle can increase your risk of getting heart disease, high blood pressure and type 2 diabetes.”

Noone says losing weight is a gradual process which takes time, and there are no miracle cures.

“Although quick fixes can be appealing, if you want to shed pounds for good you need to forget the fads,” she advises. “Instead, try making small changes and over time adapting healthy eating and physical activity habits which you can stick to in the longer term.

“Small changes sustained over time can make big differences – so be realistic. For most people who are overweight, losing one or two pounds a week is excellent progress. Some weeks will be more difficult than others but the key is to keep going.”

While gender, age and family history are all risk factors for heart attack and heart disease, there are ways to reduce the risk, says Dr Brown.

“The good news is that 80 per cent of premature coronary disease is preventable by stopping smoking, cutting down on alcohol, treating high blood pressure and cholesterol, having a healthy diet and weight and regular exercise,” she says.

“Heart attacks can vary from small events causing no residual issues to occlusion of main arteries leading to a large scar and heart failure arrhythmia and sudden death.

Nearly 10,000 people die from cardiovascular disease (CVD) in Ireland every year and about half of these die as a result of heart attack.

More lives could be saved if more people recognised the symptoms and got to hospital quickly.

Chest discomfort is the most common symptom, with six in 10 adults nominating this as a sign of someone who might be experiencing a heart attack.

Other symptoms include: chest pain at rest, upper body pain in the jaw, back, neck or arms, shortness of breath, sweating, nausea, light-headedness, loss of consciousness, weakness and tiredness.

Irishwoman in Australia: I want to return home but I’m frightened
8