How would you feel about a robot reading your child a bedtime story?

At the Massachusetts Institute of Technology, a robot called Tega can tell stories to children of kindergarten age, ask questions about what happened in the story, and use the child’s responses to help it to modify how it interacts with the child. 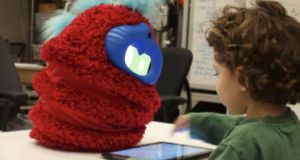 AI tales: At the Massachusetts Institute of Technology, a robot called Tega can tell stories to children of kindergarten age and learn from feedback. Photograph: MIT

Walking along a residential street one evening not long ago my attention was caught by a common enough scene. A woman was standing inside her front gate smoking a cigarette. Behind her was a baby in a buggy. I don’t know what age the baby was, but he was old enough to be able to hold his mother’s phone in his two hands while he stared at it curiously.

I passed on, noting to myself that this baby growing up, a smartphone would be a perfectly normal object, nothing unusual. What was really interesting, though, was the realisation that this baby will actually grow up with artificial intelligence (AI) as a normal part of his world – after all, it’s already in the phone.

Already, relationships between machines and children are being studied in robotics.

At the Massachusetts Institute of Technology, a robot called Tega can tell stories to children of kindergarten age, ask questions about what happened in the story, and use the child’s responses to help it to modify how it interacts with the child. Imagine being able to outsource the reading of bedtime stories to a robot that is itself all the time learning from your child’s responses.

How would that affect your relationship with your child?

Would it mean you are not really “there” for your child in the same way any more?

Meanwhile, Dr Angelica Lim of Kyoto University in Japan has built robots that can read the emotional states displayed by humans and later reproduce these states themselves. This means that when our baby is interacting with emotional robots, whether as a child or an adult, the robots might very well be better than some human beings at mirroring his emotions. Where will that leave his sense of relationship with humans?

And, of course, artificial intelligence will help him in the dating game later on. An AI programme called Bernie made it easier for people to find possible matches on Tinder. It saved people time by trawling through Tinder for them. It was taken out of operation eventually at the request of Tinder. You can bet the house that dating apps powered by AI will be a feature of our child’s life when he grows up. “I know you better than anyone else,” the app will be able to say. “See her? She’s just made for you.”

Healthcare is also at the forefront of AI research. A laboratory in Vancouver is advertising for staff to help robots to work with people with developmental disabilities. The robot will learn to recognise “various movements and activities, such as sitting, standing, laying on the floor, exercising, eating, etc, to better track the progress of residents in a group home.”

If our child has a developmental disability he might very well find himself interacting with one of these robots as a normal part of his life.

There is, of course, a dark side. Will this child, when he grows up, have a job to go to? There seems little doubt at this stage that huge swathes of jobs are going to be taken over by AI. Will he be dependent on some sort of basic income provided by the state? Without the possibility of work, where will he find meaning in his life?

I sometimes wonder if these questions are so big that we are afraid to think about them.

That strategy may not work for very much longer.

The phone that baby was holding in his hands isn’t just already using artificial intelligence – with every upgrade, it will be using more and more.

As for that mother smoking her cigarette inside the garden gate – what will her place be in the the AI world? Will she one day (soon, maybe) get a little micro-robot injected into her bloodstream to keep her doctor, her life insurer and her health insurer informed of her state of health and whether she is doing damaging things – such as smoking?

That little scene on the street was more than just a baby waiting while mother smoked – it was a metaphor for the end of one era and the start of another.