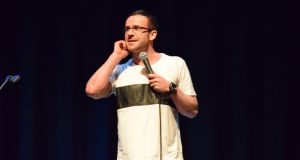 When Gary Meikle was 17, he had sex in a cupboard at a party with a girl he barely knew. A child was conceived, and later born.

In 99.9 per cent of cases like this (I am making up the statistic, but you get the drift), a teenage dad would not play much part in raising his accidental child, and would probably have lost contact with her by the time she reached adulthood. But Meikle is the 0.1 per cent – not only did he raise his daughter, mostly single-handed, but also he still lives with her and is helping her to bring up her own daughter, 12-month-old Gracie.

Gary is now a youthful-looking 40, and it seems as remarkable that he is a grandfather as that he raised his child alone. In fact, he says, he doesn’t yet use much material from his life with Gracie for his act as a standup comedian, because when he tried it, the audience thought he was bluffing and couldn’t possibly be a grandad.

“When she was 11, she said, ‘Dad, I’ve taken my first period.’ And that was a shock, because up until then I thought she was a boy.”

But his performances draw heavily on his years as a single dad raising Ainsley, who is now 22.

Here is a flavour from one of his gigs: it was tough at times, being a youthful male single parent, he says. “When she was 11, she said, ‘Dad, I’ve taken my first period.’ And that was a shock, because up until then I thought she was a boy.”

He then describes going to a shop and trying to work out whether to get tampons or towels. The helpful shop owner, he says, pressed a hot-water bottle and paracetamol on him. “I went back home, filled the hot-water bottle, took some paracetamol and went to bed,” he says. “No point two of us being grumpy.”

Gary was working in a call centre when he began to make the switch to comedy; he had always loved Lee Evans, he says, and thought he would give it a go. He wrote his material between calls. “I went on stage for five minutes and I got one laugh,” he says. “But it was enough; enough to make me know it was what I wanted to do.”

Other comedians encouraged him to make use of his experiences as a single dad. “They said, ‘that’s your best card; play it, it’s your USP’.”

Gary realised they were right. “And it was so good talking about it, and about Ainsley: she’s a wonderful girl, I’m so proud of her.”

The Meikles live in the terraced house in the East End of Glasgow where Gary raised Ainsley from the age of 11. He was born in the city, but his own childhood was tough – his mother met her third husband when Gary was five, and they moved to London.

“We came back when I was 10: and there I was, a boy with an English accent in a school in Glasgow. It didn’t go down well.”

Over the next few years, he went off the rails: he was expelled from four schools (on one occasion, for throwing a water-filled condom at the headteacher); he drank a lot of alcohol and got involved in gangs. He fell out with his mum, and ended up being taken into care, to a large children’s home in the West End of the city. Surprisingly, he loved it. “Being with so many other kids was fun. There was always something going on. It was like being in a big family, and I had loads of friends.”

I went to live in a hostel. I had no GCSEs, I hadn’t been to school for years.

Then, when he was 16, the care system kicked him out. “I went to live in a hostel. I had no GCSEs, I hadn’t been to school for years. I had nothing and no one: then I moved out of the hostel and was homeless for a while, slept on people’s sofas, had no idea how my life would pan out. I had the clothes on my back, and that was it.”

Gary doesn’t have a lot of memories of those years – he was often drunk – but he does recall the night Ainsley was conceived. The one-night stand was at a party in a block of flats: four weeks later, the girl came to find him. She was pregnant, and she was keeping the baby; a decision, he says, that saved his life.

“At that time, people who knew me used to say I’d either be dead or in prison by the time I reached 30,” he says. “And I think they’d have been right. Ainsley gave me a second chance, a reason to turn my life around.”

On the day of the birth, Gary went along to the hospital with some mates. “I was a bit stoned, and I sat in the waiting room for hours – she had her mum in the delivery room, not me. Eventually, my mum phoned: her mum had called her. She said: ‘You’ve got a little girl.’”

More time passed; and then came the moment that would define Gary’s future. “The midwife came out with the baby, and she gave her to me. I remember looking at her and I absolutely knew, right there and then, that she would be my life from now on. She was everything.”

For the next 15 months, Gary, Ainsley and her mum lived in a flat. “It was brilliant: I would make up her bottles, feed her, play with her. But much as I’d fallen in love with Ainsley, I wasn’t in love with her mother. Eventually, we came unstuck and Ainsley went to live with her gran, my ex-partner’s mum.”

Every weekend, though, she came to Gary’s. “I was living in a bedsit, but nothing would stop me having my daughter to stay.” He had found a job working in a social centre, but money was very tight. “I remember once, moving from one flat to another, I had no money for a van and had to take all my stuff round to the new place in a shopping trolley.”

Ainsley says that when she was growing up, she was aware that life wasn’t easy for her dad: but one thing stood out above everything else. “He was always there – just always there. He’d pick me up from primary school on a Friday and we’d go to wherever he was living. We had fun, and I loved being with him: when I was 11, I asked if I could stay with him full-time.”

Gary was flat-sharing with a mate at the time – “the only place for Ainsley was a single mattress on the floor” – but he was delighted to have her. “And then we got our own place, which was just brilliant because at last we were properly together.”

Raising a daughter alone was tough at times, especially around puberty. “When Ainsley started her periods, I wasn’t close to my mum or my sister so I didn’t have any women to ask about things – that’s why I ended up asking the shopkeeper,” he says.

But they muddled through: and a few years later, Gary decided to dip his toe into standup. “I thought I might as well give it a go,” he says. Four years later, he has hardly looked back: he was named best newcomer in the Scottish Comedy Awards in 2015, and performs around the country. “I’ve had some tough experiences in my life, but the good news is it’s great material for a comedy act.”

The latest instalment in the family saga happened two years ago when Ainsley told Gary that she and her then-boyfriend wanted a baby. “I urged caution,” says Gary. “I said, you’ve only been together a year.” Soon after, he was about to go on stage when he got a text to say she had just found out she was pregnant.

Gracie was born in November 2016: and this time, Gary wasn’t barred from the delivery room. “It was a completely amazing experience, even though there was a point where the midwife had to hit the emergency button and the medics piled in. I had to grab the gas and air and have a big gulp of it: I was like, whoah! That was my daughter lying there: it was like, Jesus!”

Ainsley and her partner have now split up, so it is just the three of them in the Meikle household: and Gary says he couldn’t be more excited about the years ahead with Gracie – the years he feels he missed out on with Ainsley. “I’m guessing Ainsley will be here with me for at least the next 10 or 15 years,” he says. “I always wanted another kid, but it didn’t happen.

‘Doctors in Ireland are under enormous pressure’: Why medics self-medicate
6

Bulling for a bargain at Spanish wine sale
7