‘My attitude is, I have a kidney going spare, and Sue needs one’ 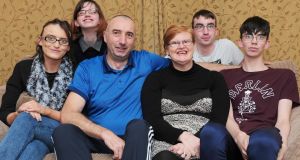 Mark and Sue Gilnagh with their children from left; Mary, Emma, Michael and Daniel, at their home in Ballybrittas, Co Laois. Photograph: James Flynn/APX

It’s a chilly day in March, and I am sitting in Sue and Mark Gilnagh’s living room at their home in Ballybrittas, Co Laois. They are talking about their forthcoming operations. Mark will be a living kidney donor to his wife, Sue, whose life revolves entirely around a dialysis timetable.

They are parents of four children, and there is currently very little quality of life together as a family. As Sue puts it: “I feel very, very tired, as if someone has put a big huge weight on top of me, like a train, and I’m carrying that around with me constantly.”

It’s bed at 9pm, and home dialysis for nine hours every night, with visits to Tallaght Hospital three times a week.

The Gilnaghs married in 1998. Six weeks after the birth of their fourth child, Emma, in 2002, when Sue was at a routine check-up with her baby daughter, the doctor noticed she looked unusually tired, and sent her for tests. Subsequent tests revealed that both her kidneys were failing.

“Kidneys should be the size of fists, and both Sue’s were the size of raisins,” as Mark says. “They were amazed she was still alive.”

It was made clear to the couple from the beginning that a transplant was going to be the only long-term health option for Sue. At that point, with their children so young, they decided to wait for a deceased donor, and only then began to be aware of the importance of organ donations. “I would never have carried a donor card when I was younger,” Mark says. “I was selfish, I guess.”

Three years later, they got a call at 4am calling them to Dublin immediately for a transplant. “Three years is not long to wait,” Mark says. Sue’s kidney came from a young man who had died in a motorbike accident; his liver and spleen also benefited other people.

“If your body doesn’t reject it, a kidney from a deceased donor should give you 10 to 15 years,” Mark explains. A kidney from a living donor, where bare minutes separate the transplant time, instead of hours, can last 30 plus years. There wasn’t any contact with the donor’s family, but they sent a thank you card via the medical team at Beaumont.

“There are no words that can express how thankful you are,” Sue says.

Unfortunately, after eight years, Sue’s donated kidney began to fail. Her health problems began to escalate, and in 2016, she had a heart attack.

For some time before that, the couple had been discussing the possibility of Mark being a living donor for Sue. Last year, 280 organ transplants were carried out in Ireland; 230 from deceased donors and the other 50 from living donors. It’s estimated there are approximately 600 people in Ireland awaiting transplants for kidneys, heart, lung, liver and pancreas.

“You have to go through rigorous testing before they consider you,” Mark explains. “My attitude is, I have a kidney going spare, and Sue needs one. I have to be honest, the thought of donating my kidney scares the bejaysus out of me. But if we even get one year out of it, or 30, I’ll have known I did everything I could.”

“My attitude is that I always try to have a smile on my face, and stay positive,” Sue says.

That was back in March. After that, the Gilnaghs prepared three times for their simultaneous operations at Beaumont.

Three times, they had to be cancelled; Sue had fluid on the chest, and infections. At the end of June, they both went into Beaumont again, and this time, the operations took place.

Recently, the Gilnaghs spoke to me again, now that they are past the transplant. Having had the procedure postponed three times previously, how did they each feel about preparing for the fourth attempt?

“I am a person who takes each day as it comes,” Sue says. “I knew no matter how long it took, that Mark was never going to turn around to me and say, ‘I’ve changed my mind, I’m not going to do this’.”

Her husband was not so circumspect. “I was so scared on the Saturday night before we went in; the whole thing of being on the brink of major surgery. I was used to seeing Sue as the patient, and the thought of me now being a patient too really did not appeal to me. But I have five people in this house, and I did it for every one of them, so that the kids can have a life with their mother, and Sue can have a quality of life.”

Sue was in for 11 days in Beaumont, and Mark for six. “I can’t say enough about Beaumont and the staff and the way they treated us and looked after us, pre and post surgery,” Mark says. “I just happened to hold an organ that was suitable for Sue, but without those guys being able to take it out and put it into Sue, nothing was happening.”

Mark’ s own operation was not as straightforward as they had hoped, and his recovery period was substantially longer as a result. Although he was due some of his medical leave from his employers at Dawn Meats in Rathdowney, he ended up needing far more, and as he is the sole earner in the house, he points out starkly how essential the support of his employers were to the transplant, both before and after.

“It’s probably not something people think about, but if they had not continued to pay me for the time I was off work, we could not have afforded for me to do the transplant.”

So how has life been for Sue since?

“Mostly, it is the sense of freedom,” she says. “I can go where I like now. If I want to go off for a weekend, I can. We can do more together now as a family; we can go out and stay out for longer, and the kids now know I don’t have to sit down every five minutes .”

For the first time in years, she is able to seek employment again, and is actively looking for a job in accounts payable. “Hopefully I haven’t been away too long.”

“I was sceptical about how much a kidney can fix,” Mark says. “I can’t understand how such a small organ can fix so many things. The woman sitting in our house drinking tea with her friend is not the same woman a few months ago. She literally could not walk to the bathroom without dizzy spells.”

Does it feel strange knowing part of his body is now in Sue’s body? He laughs. “It’s an odder feeling knowing it’s not in my body anymore!”

Although it will be another couple of months before Mark has fully recovered physically, he is now under far less stress.

“I am not sitting at work, worrying that something will go wrong with Sue. The children are so much more at ease, and a lot happier, and there is a huge sense of relief in the house. I only wish more people would consider donating organs, or being living donors.”

Tanya Sweeney: My female friendships are cracking under Covid
9

‘Stick your vaccine up your arse’ – the Covid-19 vaccine, the science and the sceptics
Real news has value SUBSCRIBE