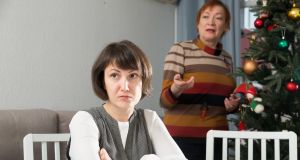 Because family patterns can be so strong it’s well worth working out in advance how to respond if certain things are said or done.

Well, little boy/girl what do you not want for Christmas?

There’s a question that wouldn’t be a winner in Santa’s grotto. It’s a question worth asking in the privacy of your own mind, though, and not just about Christmas.

’Tis the season to be jolly but for some it’s also the season to walk on eggshells. When dysfunctional families come together, old patterns of behaviour spring to life, especially if drink is involved. Not that you need drink to create a Christmas to forget – sit a bunch of people around a table who resent each other for old or imagined hurts and you have set the stage for drama.

If family conflict is what you don’t want for Christmas, remember that we have choices. We can choose whether to sit at that table or, if we are at the table, we can choose how to react to old provocations.

That said, I don’t go along with the idea, that I have heard promoted by some self-help writers, that you must cut out of your life anybody who “brings you down”.

Sometimes so-called “negative’ people have supported and loved others for years but have picked up their own negativity from life experiences – perhaps at the hands of earlier generations.

But you still have choices about whether to be in the company of any particular person, how long you will do it for, and how you will respond to provocation.

Because family patterns can be so strong – like old, familiar pathways in the brain – it’s well worth working out in advance how to respond if certain things are said or done.

For instance, I recall an acquaintance who used to lose her temper when her mother launched into praise of her sister – the apple of her mother’s eye who lived thousands of miles away and rarely came near the family home.

“If it wasn’t for her I’d be in my grave,” she would declare, thus enraging the one who actually did everything for her.

My acquaintance was never actually going to leave her mother alone on Christmas Day, nor would it have been the right thing to do. But she learned to avoid seasonal distress by deciding in advance to laugh and change the subject whenever Golden Girl was mentioned.

By the way, in any situation in which someone frequently pushes your buttons, deliberately or otherwise, it helps hugely to work out in advance, not in the thick of it, how to respond next time.

Sometimes the stakes are higher than in the Golden Girl case and serious trouble can kick off, especially when someone has too much drink and can’t handle it. In that case choices to consider include staying away, staying for only a short time or leaving quietly when trouble flares.

You also have choices about whether to get smashed at the office party or whether to kiss drunken idiots (they come in all genders).

You also have a choice about whether to take seriously what is said by people whose tongues are loosened by booze, leading them to babble about your attractiveness – sometimes intoxicated babbling leads to good relationships but probably usually not.

And you have choices about whether to spend time with people who are boring, though I have to say that in my opinion we make too big a deal out of avoiding boredom. The whole world and the people in it were not set up to entertain you or me and we need to accept boredom as part of life, including social life.

So to make it a reasonably happy Christmas (I’m a curmudgeon so “reasonably” is as good as it gets) make choices and make them now, before you set foot on the festive battlefield.

Padraig O’Morain (pomorain@yahoo.com, @PadraigOMorain) is accredited by the Irish Association for Counselling and Psychotherapy. His latest book is Daily Calm. His daily mindfulness reminder is free by email.

Lara Marlowe: Robert Fisk, my former husband, was the finest journalist of his generation
10

From pizzas to smoothies: 10 delicious ways to cook with brussels sprouts
Real news has value SUBSCRIBE