If health sector were a country, it would be fifth-largest emitter on planet 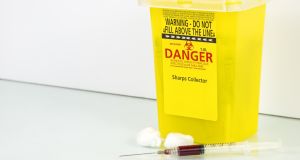 Doctors work in a world of single-use plastic, diagnostic tests and chemical medicines.

I try to reduce my carbon footprint and live in an environmentally friendly way at home, but I worry about the impact of my day job on the planet. Like most doctors I live in a working world of single-use plastic, diagnostic tests, outpatient appointments, hospital admissions, chemical medicines and immediate transport of goods and people.They all have their effect, and I suppose I did not see how my work could ever be much different. But I found out two encouraging things this week. One is that I am not alone, and the other is that something can be done about these problems in my workplace.

A recent survey by the Royal College of Physicians in Ireland highlights doctors’ concerns about climate change. It shows that doctors working in the Irish health system are deeply concerned about the effect of climate change and pollution on the health of our population and want to play an active role in addressing these challenges (Medical Independent, November 5th, 2019).

A survey of the doctors who are members of the RCPI of Ireland found that 97 per cent of respondents are concerned about climate change and its impact on health. They are particularly concerned about high volumes of medical waste, and see single-use plastics and food waste within the hospital system as issues they want to see tackled. Some 95 per cent of the doctors surveyed say they would like to take a leadership role in creating a sustainable healthcare system.

On that note, it is very encouraging that the Irish Doctors for the Environment organisation, reformed this year, now has over 400 members and is a strong advocacy group.(When I was a founder member of the first IDE 25 years ago, the whole membership could have fitted into a taxi.) If you want to see their many excellent ideas, they have a very good website and newsletter. One of their initiatives is the carbon-neutral conference. I saw this in action at the recent Dot Md conference in which there was absolutely no waste and everything was either reusable or recyclable.

I don’t see any specific plans for dealing with the problems of the healthcare system’s waste of resources in the recent “Ireland’s Climate for Change” document. If HSE leaders and politicians need any guidance, they could should read the UK’s Academy of Medical Royal College’s Protecting Resources, Promoting Value: A Doctor’s Guide to Cutting Waste in Clinical Care (2014), quoting the World Health Organisation’s observation that “climate change is the largest threat to human health in the 21st century and the NHS remains the largest single contributor of greenhouse gases in the public sector”. Most of these emissions, say the academy, did not come from heating or lighting hospitals, but directly from clinical practice. The document shows simply how, by reducing waste, healthcare systems reduce carbon and save money. It demonstrates that by over-testing ,over-prescribing and admitting patients to hospital unnecessarily, we waste resources that could be diverted elsewhere.

It also shows what we have known for a long time, money spent wisely in primary care saves more money down the line.

The cultural shift required will need to value the targeted use of clinical resources to provide greatest benefit to the patient.

It says “The global healthcare climate footprint is equivalent to the annual greenhouse gas emissions from 514 coal-fired power plants. If the health sector were a country, it would be the fifth-largest emitter on the planet.” Clearly, there has to be a change.

It is hard to imagine a hospital being anything other than a giant carbon sink where everything is drenched in chemicals, wrapped in plastic and churning out pollution. But does it have to be like this? And is it really necessary or desirable for everything in a hospital to be used once and then discarded? Science writer George Winter in “Environmentalism is a cry from the soul” (Medical Independent, October 22nd, 2019) cites hospitals in Asia that are just as clean and efficient as American hospitals but far less expensive and using far fewer resources. It would be good to see hospitals with recycling policies, with solar panels and waste reduction policies. Meetings could be run as conference calls and workers could be encouraged to share transport. Basically, the health service needs a change of ethos and culture from top to bottom .

Dr Ina Kelly, the chair of the Public Health Medicine Environment and Health Group says climate change is likely to have many health impacts so is of concern to doctors and other healthcare providers. The RCPI survey demonstrated much concern, interest and motivation to contribute to solutions. “Sustainability is essential but insufficient,” says Dr Kelly. “We all need to adapt to change before it is too late.”