Baby mortality: The evolution of how we deal with the sadness 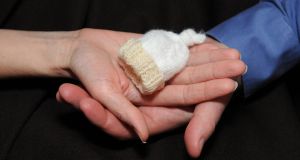 A mother and father holding the hat of a premature baby: no more secrecy and silence in grief.

In the past, the death of a baby was shrouded in secrecy and silent grief in Ireland. The legacy of this hidden, unspoken grief is ever present in our current ageing population today.

It often raises its head at the end of life, or in some instances for grandparents following the unexpected death of a baby as grandchild. When speaking of their baby who has died, young couples today frequently report that older people in their local communities come forward to privately disclose a similar loss – though in very different circumstances.

For, in the past, mothers who gave birth to a stillborn baby or a baby who died soon after being born were not routinely offered the opportunity to see or hold their child. In stark contrast to today’s care practices across Ireland’s maternity services, there were no footprints offered, no lock of hair, no cot sheet from the incubator or special blanket which may have cradled their baby. No items to take home as mementos of their baby’s short lifetime and brief earthly existence.

Many bereaved parents were simply advised to go home, get some rest, try to put it behind them (an impossibility), and have another baby – a false and misguided remedy that did not fix their pain but merely served to bury it deeply.

During my work in caring for older people, an elderly healthcare professional who was facing her own end of life, reflected on this subject. “We took the babies away, thinking in seeing their little baby we might be upsetting the mothers even more.” This is an indication of the misunderstanding that their grief would be lessened in some way by not seeing their baby, and prevent visible upset. In sombre tone she went on to say that “I suppose we did wrong by them”, conceding that they did not operate from a place of knowing.

Have you experienced miscarriage or baby loss? Share your experience

And so, the untouched grief and unspoken loss had nowhere else to reside but deep within the bereft mother’s psyche.

A century ago, Sigmund Freud and his contemporaries believed that in order to recover from loss, one had to cut ties with the person who had died and move on. Emphasis was placed on detachment and closure, rather than any sense of ongoing attachment to the deceased loved one. And so it was, that silence spoke, as dictated by the social norms of that generation. As our understanding of grief has changed, so too have our care practices. The tide has begun to turn in this area of care, and is thankfully still turning. While there are many factors influencing change, the truth is that it was the voice of bereaved parents who began to shift consciousness, in an area of care that, prior to the 1970s, the medical or psychological literature made no reference to. Parents championed change around then, and they continue to advocate today, their motivation stemming from their own lived experience of immense heartache.

A new understanding of grief has emerged in recent times, which is supporting the tide change. We now know and understand more fully that placing emphasis on the ongoing bond parents have with their deceased baby is of comfort to the bereaved. Contemporary grief theory and research has helped us to see that parents have a bond with their baby that they will have for the rest of their lives, and that memories created around the time of birth and death, or stillbirth, are etched forever in their hearts.

Hearts are broken. There can be no minimising the pain of the shattered dream as parents grieve throughout the lifespan for who their child might have been. But the memory of that child is now woven into the fabric of their family, more openly talked about, and actively remembered. We have much to learn from bereaved parents and their families, of all generations, about what care practices were like back then, what they are now and how we must continue to strive for better care into the future. One thing is certain, parents have an overriding need that their baby is never forgotten, and as an evolving, mindful society we are only beginning perhaps to compassionately open up to acknowledge that need.

As we draw from the wisdom of our Celtic ancestors, and our rich tradition in caring for the dying, we must endeavour as a society to continue to love, grow and evolve, in an effort to facilitate the healing of broken hearts. For the Celts believed that the people we love who have died are not in some cloudy faraway heaven, rather they believed that they are here among us, in the invisible embrace between us.

Perhaps it is that those children, whose birth tragically collided with death, and were lost to us as a nation, in the quiet whispers of thought or dream, speak to us still.

Rambling house on the Hill in Monkstown for €1.95m
6

Aortic dissection: Getting to the heart of the matter
9