Tired and often short of breath? It could be iron deficiency 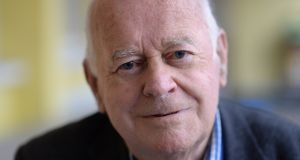 Patrick Brennan: ‘I never thought anything else was wrong. But I’d found it hard to do my daily walk. Photograph: Dara Mac Donaill

After experiencing heart failure and undergoing a triple bypass Patrick Brennan recovered and normal life resumed – for a while.

For several years everything seemed fine until the beginning of this year when Patrick, a father-of-five from Drogheda, began to feel very tired and lacking in energy. Memories of the traumatic operation eight years previously had receded, recalls the 87-year-old retired telephone engineer.

“I never thought anything else was wrong. But around the start of this year, I found it hard to do my daily walk,” he says.

“After about 100 yards, for example, I’d need a rest and I was never like that before.”

Patrick saw his GP, who sent him for tests. The results showed his arteries were blocked and he was given medication to resolve the problem, but that wasn’t the end of it.

A few months later, Patrick noticed that again he seemed to be constantly fatigued. His GP sent him to hospital for more tests.

“They found out that I was low in iron and I was given an iron infusion; I had it over two days in June,” he recalls. “After I had that I felt great and I improved a lot.

“The iron did me a lot of good. I had blood tests again recently and they decided that I didn’t need another iron infusion at the moment.”

Patrick is one of about 90,000 people in Ireland currently living with heart failure, and one of the estimated 50 per cent of those patients at risk of being iron-deficient.

Consultant Cardiologist Pat O’Callaghan believes there’s a need for more awareness about the condition, which is being highlighted by World Iron Deficiency Day on Tuesday, November 26th.

“Heart failure is when the heart becomes damaged and the inability of the heart to pump sufficient blood around the body,” explains Dr O’Callaghan, who is based at Waterford University Hospital.

This results in a lack of oxygen and correct nutrients being supplied around the body. The condition brings with it several symptoms such as tiredness, shortness of breath, a fall in energy and a tendency to sleep a lot.

And it’s increasing in prevalence every year, he says, partly because although more people are now surviving heart attacks, they are left with damage to the heart.

Another reason is simply that people are living longer. There are now an estimated 10,000 new cases of heart failure every year, he says, adding that, as statistics show, a high proportion of patients with heart failure also have low iron levels.

Research conducted by the European Society of Cardiologists (ESC) shows that in almost 500 people surveyed, the prevalence of iron deficiency in people living with heart failure was 57 per cent. The research also showed that those who were iron-deficient had longer hospital stays compared to those who were not.

The reason, Dr O’Callaghan explains, is because heart failure results in an excess of fluid in the body.

“Patients will experience it in the legs, as well as in the tummy and intestine,” he says, adding that this causes malabsorption of vitamins and minerals necessary to the body.

“One of the key things the malabsorption affects is iron. If you have reduced levels of iron you will become anaemic. So it creates low iron levels and anaemia in people who are already tired and weak because of their heart failure, and it makes the whole situation worse.”

It is only in the last four or five years, says Dr O’Callaghan, that the medical profession has realised just how prevalent iron deficiency is in heart failure patients.

More awareness is needed that heart failure can cause iron deficiency, and that iron deficiency can be easily treated, bringing about what he calls “a significant improvement in the symptoms”.

“It’s very easy to measure iron levels – it’s done through basic blood tests,” he explains, adding that patients and their doctors should realise anyone with heart failure should have their iron levels checked by their local practice nurse or GP. If iron deficiency is detected, he emphasises, it needs to be treated.

“To treat it, you need to get the iron levels up sufficiently. Therefore the patient needs to be given iron intravenously, that is through an IV infusion – and it has to be given in a hospital setting. “

Creating more awareness around iron deficiency in heart failure patients, which discourages patients from exercising, is one of the aims of Croí, the West of Ireland charity which supports patients with heart disease and stroke.

Neil Johnson, the CEO of Croí, is also a founder member of the Global Heart Hub, a global alliance of heart patient groups. Both organisations work hard to promote more awareness of iron deficiency in heart failure patients.

“We now know that iron deficiency is an independent predictor of outcomes for heart failure patients. It’s a major contributor to exercise intolerance, because people do not have the energy to exercise, and lack of energy is a sign of heart failure,” explains Johnson.

“Patients present with heart failure, complaining of tiredness and weakness as a core symptom, which it is,” he says, adding that up until recently the issue of an accompanying condition of iron deficiency had not been “foremost” in clinicians’ minds when dealing with heart failure patients.

“Research is currently ongoing into whether heart failure is a definite cause of iron deficiency and it seems that it is.