Health Hints for the Home: ‘Try to ease the distress of the cough with soothing cough syrups’ 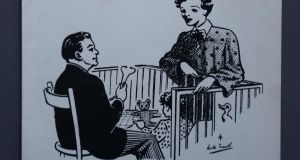 Cough sedatives are, of course, no longer advised, and certainly not those of the 1950s, which often contained opiates.

Here is what was included in the fifth pamphlet – Cough in Children.

Cough is a very common and important symptom in childhood. Many of the acute infectious illnesses of childhood are accompanied by troublesome coughing. The common cold, for example, often affects the chest, and the cough may persist for weeks. Influenza has the same tendency to cause irritation and inflammation of the larynx and windpipe, and to be accompanied and followed by a hard exhausting cough . . . Another common cause of acute cough in children is measles. The child who is developing measles always has a harsh barking cough: there will also be running from the nose and watering of the eyes, quite a high fever, and a general air of misery . . . before the rash appears on the third or fourth day of the illness.

The cough of the common cold and influenza is troublesome, but not particularly serious: its chief drawback is the disturbance and fatigue which it causes to the sick child. Whooping cough and measles are another matter.

In whooping cough, the cough is very persistent and exhausting, and lasts usually for several weeks; the strain of coughing throughout the day and night over a long period makes whooping cough a serious disease, especially for the very young. Acute bronchitis and pneumonia are common and serious complications of measles and whooping cough, and cause a large number of deaths in children each year . . . in measles the child is already feverish, sick and coughing from the measles itself, and the onset of pneumonia may therefore be overlooked.

How may one suspect its presence? The most important sign is that the child’s breathing will become more distressed: he will be breathing in short rapid movements, literally panting for breath, and often, especially in the very young, there will be a definite grunting noise with the breathing . . . In addition there may be some pain in the chest, a blue or purple tinge to the skin of the cheeks and ears, perhaps vomiting and sweating, and, of course, a troublesome cough. If there are any good reasons such as these for suspecting pneumonia . . . the child should be seen by a doctor without delay.

So, if your child gets a fever with a troublesome cough, keep him warm in bed, and try to ease the distress of the cough with soothing cough syrups – cough sedatives. See to it that his bowels are free, and that he has frequent drinks – water, lemon or orange drinks, whatever he prefers. That’s your part of the job – make him comfortable.

But, in addition, you must have him seen by the doctor if he does not improve quickly. It is the doctor’s job to treat the infection which is causing the illness – it may be with Sulfa drugs, Penicillin or some similar medicine, that’s his decision and you will lessen the risk to your child if you act promptly and sensibly.

The unsolved mystery of Peter Bergmann
7

Paul Flynn: Three delicious dishes you can bank on this weekend
8