Good weather can be bad for your health, experts warn 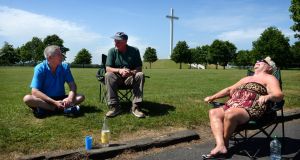 Is good weather bad for your health? With a sharp increase in weather-related accidents and casualties across the country, it is becoming clear that this cloud covered nation is not equipped to deal with the dangers the fleeting summer months bring.

Recent days have seen drownings, a suspected sunstroke death, a fatal accident involving gardening, and a death while sunbathing.

This summer has been one of the worst in recent years for water-related deaths. There have been 10 drownings over 15 days, eight of them swimming accidents and two fishing-related. The only year to rival this has been the heat-wave of 2013, during which there were 13 fatal accidents in 14 days.

Leech points out that a high proportion of fatalities occur in quarries and that the majority of these victims are male. This is often due to a propensity to overestimate skill level and to underestimate risk.

Only one of the ten deaths recorded this summer was female. In late May, Ennis teenagers Jack Kenneally and Shay Moloney tragically died in one such incident, after getting into difficulty while swimming in an abandoned quarry.

Leech says there are numerous reasons why Irish people underestimate the power of the sea, in particular during fine weather. He stresses that swimmers should always swim within their depth, in an area with an on-duty lifeguard.

He says casual swimmers should take into account that swimming in a local pool cannot compare to facing the harsh, unpredictable elements of the Irish Sea or Atlantic Ocean.

As a nation notorious for pale complexions it is essential to remember that the factor 50 is not reserved for those getaways to the Mediterranean.

Consultant dermatologist Dr Anne-Marie Tobin highlights the detrimental impact sunburns can have on one’s medical health, as they increase your risk of getting skin cancer.

Children, she stresses, are at the highest risk. Tobin advises people to pay attention to the smart sun code as outlined by the Irish Cancer Society as well as those provided by the Irish Skin Foundation.

The Irish sun should not be underestimated, as sometimes there is even more at stake than sunburn. A man was removed from a house in Cork city over the weekend under the suspicion that he may have died of sunstroke.

Although no definitive cause has been established, officers, have refuted any idea of foul play and are approaching the incident as a tragedy.

The HSE and National Ambulance Service emphasise that those most vulnerable to the summer heat are the elderly, very young and those with existing medical conditions. An increase in temperatures can exacerbate heart and respiratory conditions as well as leading to sunburn. In extreme instances, the sun can lead to heat stroke, which can be fatal. Sunstroke can still occur even if there is no previous indication of a heat-related ailment.

The symptoms of heat stroke include high body temperature, intense sweating which ceases suddenly, muscle cramps, rapid heartbeat and hyperventilation. In extreme cases it may affect the nervous system, leading to mental confusion, seizures and lack of coordination.

These symptoms tend to develop over several days and are usually a result of milder heat-related maladies such as heat exhaustion that has been left untreated.

But even mundane activities should be treated with caution: recently Tipperary woman Joan Kinane was fatally wounded when her ride-on lawnmower collided with a ditch and overturned.

It is not merely the natural elements which change during this time of year; so do our everyday activities and attitudes, and so precautions must be taken. A man is currently in serious condition in Beaumont Hospital after he was struck on the head by a motorbike while soaking up the sun in a public park in Darndale. It is understood a youth was driving the bike before it collided with the nearby victim.

The Road Safety Authority warns of an increase in agricultural vehicles on roads during summer. Motorists travelling behind farm machinery should be patient and only overtake when it’s safe to do so. Motorcyclists also tend to travel further in summer months than winter, making this a high-risk period.

The Road Safety Authority advises people to expect the unexpected, and ensure wheels are regularly washed down and loads properly secured. If walking, cycling or running, keep alert and do not wear headphones. To combat sun glare, ensure your windscreen is clean inside and out, add windshield washer fluid to the water in the reservoir and check that the wipers are not worn away or damaged. Buy polarised sunglasses, and keep a pair in the car is a must. More tips here.

GP Dr Pat Harrold suggests the increase in accidents over summer can be attributed to many factors, including sleep deprivation linked to the increase in daylight hours. We also underestimate the impact seasonal changes have on daily activities.

Harrold sees this particularly with athletes and those engaging in physical work. He reminds people not to overexert themselves especially those sitting exams or carrying out manual labour.

‘My mother is a controlling, manipulative, narcissistic person'
8